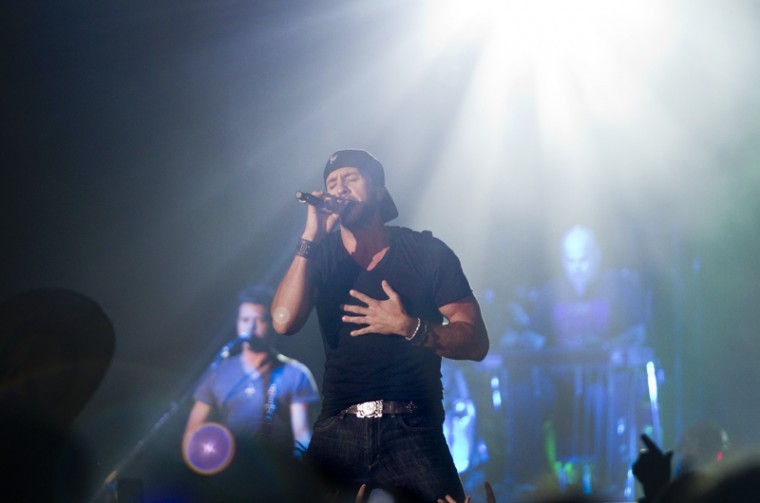 Luke Bryan and his band perform for hundreds of screaming fans during Thursday's Homecoming concert at Diddle Arena. The concert was part of the CMT on Tour series, featuring other artists Matt Mason, Lee Brice and Josh Thompson.

Bryan, whose current single “I Don’t Want This Night To End” has peaked at No. 27 after seven weeks on the Billboard Country Charts, was a part of a diverse set list which included covers of “Enter Sandman” and “Baby Got Back.”

Bryan also played his other hit singles at the sold-out show, including “All My Friends Say,” “Country Girl (Shake it for Me)” and “Rain is a Good Thing,” as he tried to butter up the crowd Thursday night.

“I heard if you go to Western Kentucky University you have the best legs in college,” Bryan said of the effect WKU’s Hill has on its students.

Though gates were expected to open at 6 p.m., the line to enter the concert stretched across the side of Parking Structure 1 and back up Avenue of Champions until doors opened shortly after 6:30 p.m.

Freshman Jessica Riley from Clarksville, Ind., said she hadn’t been to a concert since she was 10 years old. But she wanted to give Bryan a chance because she loved his music.

Brice, a native of Charleston, S.C., said he had played in Bowling Green once before in a smaller bar setting.

“It’s a good feeling,” he said of now playing to a packed-out Diddle Arena. “We work hard and we work long. We look forward to this.

“We’re doing this so we can get into an arena like this with all the lights and sound.”

But country was not the only type of rock present at the concert.

Matt Neal, a former student at WKU from Milledgeville, Ga., proposed to his girlfriend Maria Estes, a WKU graduate this summer from Edmonton.

Neal said he planned the proposal a few hours before the concert.

“It’s a special night — a night we’ll always remember,” he said. “She wanted a lot of people to be around. I guess there’s no better place than a concert.

“I kept wanting to do it after a love song, but I couldn’t because they would start right into another song, so I had to do it in between sets.”

Estes said the proposal took her by complete surprise.

“This makes it like a hundred million times better,” she said of the concert.

As part of CMT on Tour, the concert was taped live, forcing Bryan to actually replay one of his songs, “Drunk on You.”

Georgetown sophomore Alexia Alejandro said the cameras didn’t affect the concert at all though.

“It was freaking awesome,” she said. “It was the best concert I’ve ever been to. I could’ve listened to it all night.”