Outerbridge scores late in overtime to give WKU win over MTSU 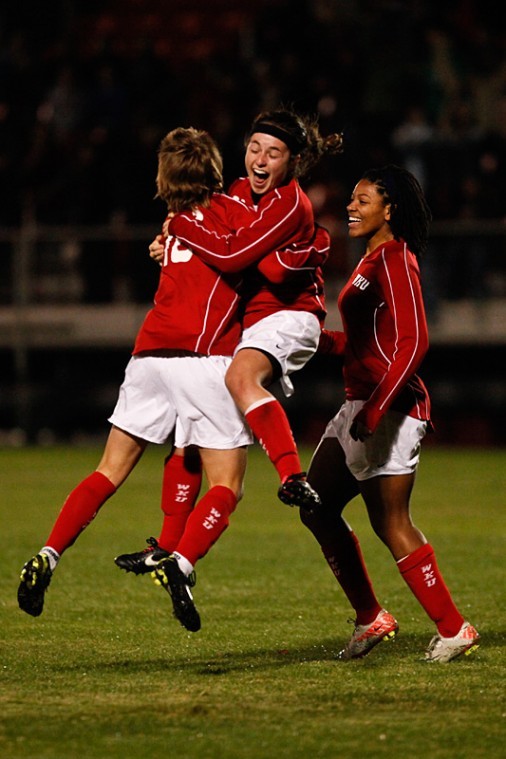 After going into overtime, the team celebrates their victory after Mallory Outerbridge, Senior from Regina, Saskatchewan, scored the winning goal against Middle Tennessee State. The Lady Toppers won 2-1.

The WKU Lady Soccer team entered Friday nights showdown with MTSU in fifth place in the Sun Belt. 90 minutes was not enough for the two teams, however. It took a goal from senior forward Mallory Outerbridge in the 100th minute to give WKU a 2-1 victory over their rivals.

With the win, WKU moves into the fourth seed for next weeks Sun Belt tournament and a date with MTSU yet again. WKU is now 12-6-1 on the season.

Senior forward Amanda Buechel gave the Lady Toppers the lead in the 30th minute of the game. Senior midfielder Lindsay Williams took a corner that was headed by sophomore midfielder Chrissy Tchoula when Buechel came and redirected the ball into the goal.

“Chrissy did a great job redirecting the ball and I just got lucky and got in front of the goalie where I could redirect it again,” Buechel said. “She did most of the work, but it was good.”

WKU took the 1-0 lead into halftime with both teams having six shots in the first half.

“Basically he (Head Coach Jason Neidell) told us just keep playing hard and doing what we’re doing,” Outerbridge said. “The whole week we concentrated on not letting crosses get in the box and that was basically his speech at half time, just keep doing that and it’ll take care of business.”

In the second half, MTSU was able to get a lot more chances than WKU, but it took the Lady Raiders 82 minutes to find the back of the net. MTSU had double the amount of shots as WKU in the second half

“We were talking about being more aggressive in the second half and unfortunately we weren’t,” Neidell said. “Middle played a good second half. They really took it to us and had us on our heels.”

MTSU went on to control a good portion of the overtime period, but each team had two shots for the period. In the 100th minute, sophomore midfielder Allie Auscherman played a ball into the box and Outerbridge played a slow roller past the keeper giving WKU the 2-1 lead.

“We had a sour taste in our mouth from last year when we lost to them in penalty kicks and we came out on top this year,” she said. “I just wanted to win against MTSU and give them a taste of what is going to happen next Wednesday.”

WKU has the fourth seed for the tournament and MTSU has the fifth, meaning the two teams will meet in the first round of the Sun Belt tournament next Wednesday in Murfeesboro, Tenn.