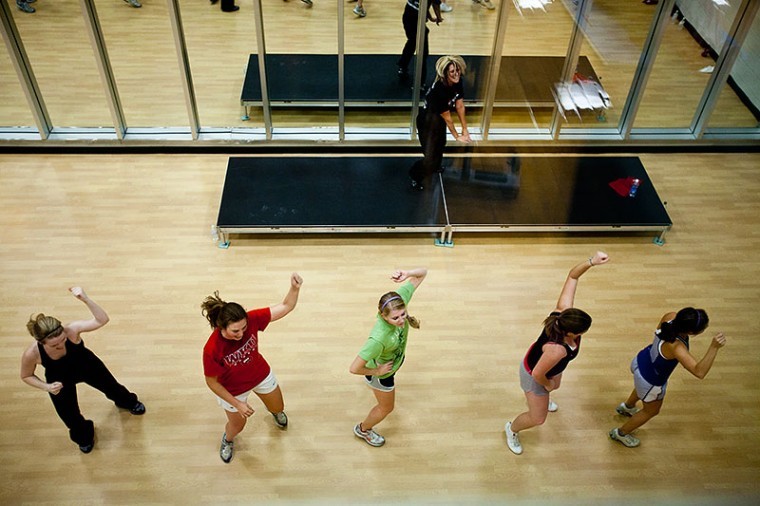 WKU students busted out their best shimmy, salsa and meringue moves to raise money for the Susan G. Komen Foundation at last night’s WKU’s Zumba for a Cure.

A total of 113 students, faculty, staff and Bowling Green community members gathered in the Preston Fitness Center’s multipurpose room to Zumba from 5 p.m. until 8 p.m. In the process, they raised $200 to go toward breast cancer awareness and research.

There was no charge for Zumba for a Cure. However, coordinators did ask for donations from participants. The night was made up of three Zumba sessions led by instructors Jacquelyn Cline from the Preston Center, Danisha Wood and Stephanie McElroy from BAC.

Zumba is a Latin-inspired dance-aerobic class that combines exercise with modern Latin music and dance.

“I wanted to support breast cancer research, and I love Zumba,” said Lexington sophomore Emily Gilbert, “so I thought I’d come out for a good cause.”

Organized by the WKU Student Chapter of KPHA — Kentucky Public Health Association — and in collaboration with the Preston Center and Fitness Lab, Zumba for a Cure is a national event. However, this is the first year WKU has participated.

KPHA Treasurer Ines Dugandzija said KPHA decided to do Zumba for a Cure at their first officers’ meeting. Dugandzija has been an advocate for breast cancer awareness and women’s health, and wanted to chair an event in those areas. She served as committee chair and coordinator of the event with Erin Milliken as her co-chair.

“Instead of giving out brochures, I thought it would be great to incorporate Zumba,” Dugandzija said.

“When survivors identified themselves at the event, we had accomplished our goal,” Dugandzija added. “Zumba for a Cure is dedicated to those who fought breast cancer, those who continue to battle, and in memory of those who did not have a chance to tell their story.”

Dugandzija said she hopes that Zumba for a Cure has inspired new encouragement, support and participation for a larger event like the race next year.

Zumba with a cause brought out all age groups, races and genders to support a cause close to many people’s hearts.

“It was a lot of fun and we got to support a good cause,” said Shelbyville freshman Kyla Selby. “I got to help save the boobies!”