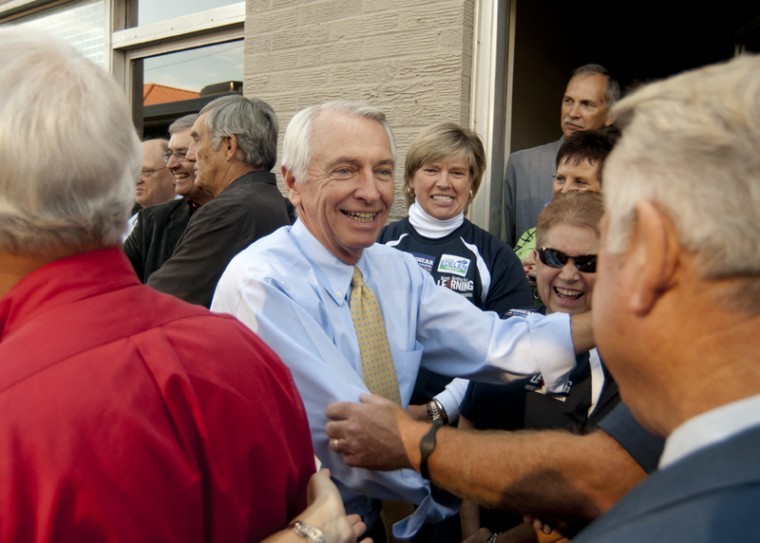 Gov. Steve Beshear made an appearance in Bowling Green this morning while on the state-wide Tested, Trusted, Tough bus tour with other Democratic candidates to rally Democrats and raise excitement for the upcoming Nov. 8 elections.

The excited crowd greeted them on the sidewalk as they arrived, with some student workers holding up homemade signs that read “4 More Years” or “Bowling Green is Democrat Country.”

The politicians parted through the crowd, making their way inside the office to deliver their message — Kentucky needs the Democratic ticket elected to continue leading the state out of hard times.

“We have been fortunate to have someone like Steve Beshear lead us the last 3 and a half years,” Wendell said. “Let’s don’t make this a national race, which the Republicans want to do. This is a Kentucky race, and we are going to pick a Kentuckian to lead Kentucky.”

After Wendell’s introduction, Beshear took center stage in the cramped office space. After thanking the Bowling Green community, Beshear pumped up the crowd before he discussed budget cuts criticized his Republican opponents for trying to cut spending across the board, specifically on cutting education spending.

The governor stressed that while Kentucky was faring better than many states in hard economic times, the state wasn’t out of trouble yet.

“I am not going to rest until every Kentuckian that needs a job has a job,” he said.

Beshear then handed the rally off to another Democrats running for reelection, Conway.

Conway brought up the recent controversy around political ads bashing Beshear that didn’t reveal the donor responsible for paying for the ad campaign. It was later revealed after a restriction that barred the ad from running that Beshear’s Republican opponent David William’s father-in-law was primarily responsible for the advertisements.

“If they were telling the truth and they are proud of what they’re saying, they would tell you who they are,” Conway said.

There was one common theme throughout each politician’s speech — the race isn’t over yet.

Speaking about Williams, Beshear rallied the crowd for the soon approaching Election Day.

“We have got to turn it up,” Beshear said. “We don’t wanna just win, we wanna beat this guy like a drum.”