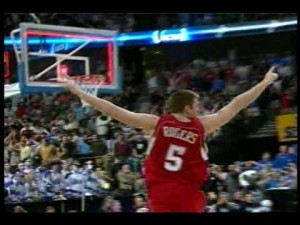 Ty Rogers, the man whose shot etched WKU basketball in NCAA Tournament history, is looking to make more memories at his alma mater.

Through his Twitter account, Rogers on Friday announced tentative details of a possible “Big Red vs. Big Blue” exhibition game at Diddle Arena.

Rogers tweeted that several former WKU players including himself, Courtney Lee, Jeremy Evans — both current NBA players — and Matt Maresca have all agreed to participate and said he’s “in contact” with University of Kentucky players.

He said the event is tentatively schedule to take place the week after Homecoming with an official date coming “early next week.”

This March will mark the four-year anniversary of Rogers’ buzzer-beating shot in the first round of the NCAA Tournament that propelled WKU to a win over fifth-seeded Drake.

The Toppers eventually reached the Sweet 16 before losing to UCLA.