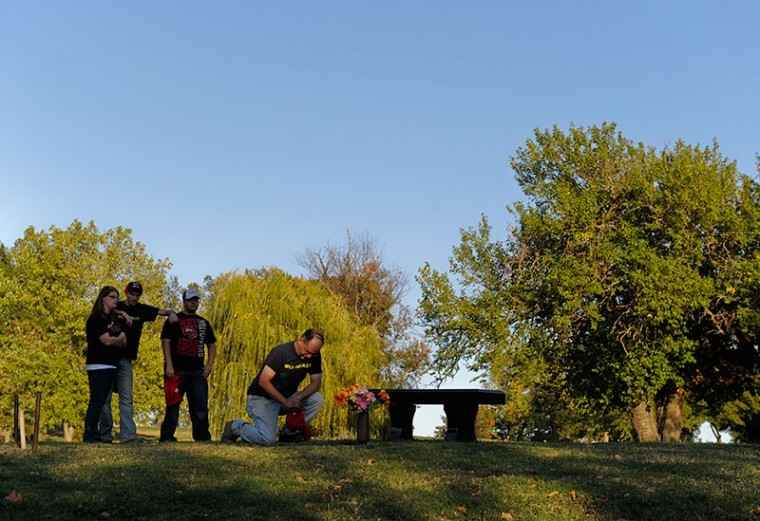 WKU history instructor David Serafini kneels at the foot of Will Norton’s grave Saturday evening In Joplin, Mo. Norton was driving home with his father after his graduation ceremony from Joplin High School when the tornado hit and pulled Will out of the vehicle

JOPLIN, Mo. — When Tracey Presslor prays, she asks God to tell Will Norton how much good is happening on Earth because of him.

Presslor, or “Aunt Tracey” as she is known, wore a “Remembering Will Norton” T-shirt as she spoke about her nephew to a group of 14 WKU volunteers spending their fall break rebuilding Joplin, Mo.

Norton, an 18-year-old graduate of Joplin High School, was killed during the May 22 tornado that struck Joplin on his graduation day. Norton was driving home with his father when they were caught in the storm. Although his father survived, Norton’s body wasn’t found until several days later in a nearby pond, just blocks from his home.

It’s because of Norton’s story that David Serafini, a history instructor at WKU and the adviser of Phi Sigma Pi National Honor Fraternity, first organized a trip to Joplin to help with rebuilding efforts.

“I watched this story. I looked up who Will Norton was,” Serafini said. “I don’t know, maybe it brought out the big brother in me.”

As the search for Norton unfolded over the days following the tornado, Serafini asked a friend, “Why am I getting so emotionally involved in this kid? Don’t know him from Adam, never met him.”

Serafini said his friend looked at him and replied, “It’s just you. It’s who you are.”

At the end of June during the first trip to Joplin, Serafini reached out to Presslor to share how Norton’s story had affected him. Presslor later met with the WKU group to talk about Joplin and Norton’s life.

On the return trip to Missouri last week, Serafini and the students met and talked with Keegan Tinney, one of Norton’s best friends since middle school.

“I knew him before May 22,” Tinney said after talking to the group. “Now, the world knows him after.

“It’s different to see that, but it’s nice to tell people that he was an every day kid, but he lived such an extraordinary life.”

Tinney, an 18-year-old Joplin native, lost his elementary, middle and high school, church, town and best friend in one day. But, Tinney said, one of the most difficult things to deal with after the storm was not knowing Norton’s fate.

“When it happened, it was relief, but it was that final heartbreak,” he said. “You lost the hope.

“People want to jump on that bandwagon. ‘Oh yeah, I knew Will,’” Tinney added. “I had my first beer with him. We went camping. All these things we really did together. People ask you, ‘Well did you know him?’ Well, yeah. That’s one thing that really sucks. People don’t understand how well you knew him and what it means to, like, not have him.”

As Tinney spoke to Serafini, he also shared positive memories of his friend.

“I remember the first time we went camping,” Tinney said. “Will had never been camping, he was like 17, and we all went camping for the first time. The fact of sleeping in a tent just shocked him. It was a fun time. He was worried about getting eaten by a bear, or a wild unicorn.

“He was always making a joke like that that would lighten the mood.”

Later that day, Presslor made a special visit alongside Serafini and the students to Norton’s burial spot.

“That was the hardest part of this whole weekend,” Serafini said after visiting the grave. “I got down there on one knee and I said, ‘Here we are, Will.’”

Despite all of the media attention Norton’s death received, Presslor said she is grateful for everyone’s support.

“It means probably more than anybody knows,” Presslor said of the group’s reason for coming to Joplin. “It’s validation every time someone gets a hold of us that his death wasn’t in vain. We know it’s not — it’s just that confirmation.”

Pending a vote from the full chapter, Norton will be made an honorary brother of Phi Sigma Pi, Serafini said. Norton seemed to uphold the fraternity’s values of scholarship, leadership and fellowship, he said.

“It’s just the right thing to do,” Serafini said.

“Oh guys, that would be so sweet,” Presslor said in reaction to the news. “You would really love him.”