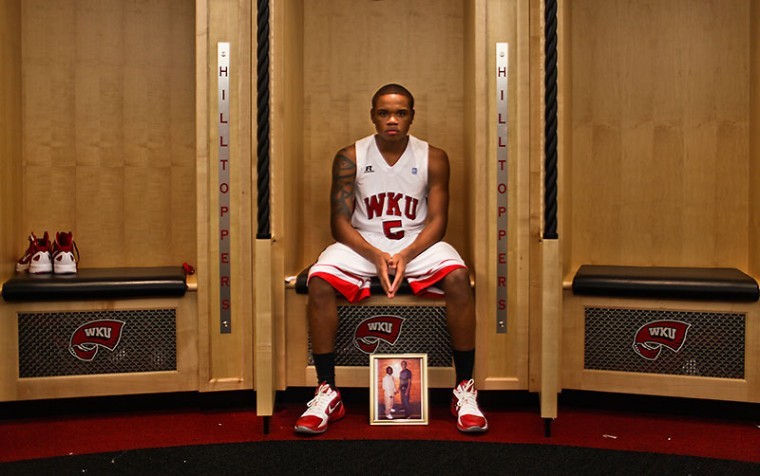 WKU freshman guard Derrick Gordon sits by a photo of him and his fraternal twin brother, Darryl, at his locker in Diddle Arena. Derrick has dedicated his basketball career to Darryl, who has been in prison since 2009 for attempted murder.

Derrick Gordon keeps a photo of him

and his fraternal twin brother Darryl in his dorm room. In his

locker at Diddle Arena sits another, similar picture of the

It’s how the star freshman keeps his

mind focused on his brother throughout the day.

“When I look at that picture, I just

kind of sit there and think, and I get emotional,” he said. “I know

and going to school, and it’s not happening because of the

Derrick has dedicated his basketball

career to Darryl, who was put in prison at the age of

Plainfield, N.J., neighborhood between Darryl and another man.

Derrick said another neighborhood kid had been “picking on” Darryl

for several weeks, making fun of him for things like his short

stature, and it hit its boiling point on this particular

The other man knocked Darryl’s hat

off his head, not fearing any retaliation from Darryl, even though

The other man showed a knife, so Darryl pulled out a

It required him to have open heart

surgery, and Derrick said he’s still not sure how the man

Darryl was arrested and charged with

attempted murder and sentenced to five years, one month and six

Derrick received the news during

basketball practice when he was 16 years old.

“I was shocked. I was just stunned,”

he said. “It was just hard to believe because my family isn’t in to

all that — violence and getting arrested and stuff like

When Derrick takes the court this

season in his first year at WKU, he’ll don No. 5 — the number his

brother wore when he was a basketball player.

On the left side of Derrick’s chest

is a tattoo that reads “M.B.K.,” which stands for “My Brother’s

Keeper.” On the right inside of his arm reads another that says

“HOPE and FAITH,” and on the left side reads “FAMILY

Derrick said Darryl is his main

trying to make it to that next level so that when he gets out, he

has something to come home to,” Derrick said. “Everything I do

right now is for him — on and off the court.”

Derrick’s dream was for his

basketball career to continue with Darryl’s. In middle school,

though they were both still young and underdeveloped, it looked as

if that might be a possibility. Derrick said he and Darryl started

receiving interest from the same colleges about

Darryl, a point guard, was the more athletic one of the two when

they were both younger, and it stayed that way for a

“I would tell the school that the

only way I’m coming is if he was coming,” Derrick said. “At the

same time, Western Kentucky was looking for a point guard. It could

have worked out real perfectly.”

But several things changed once the

two got to high school. Derrick grew to 6-foot-3 while Darryl

Derrick grew into a quiet, somewhat

The biggest change came when Derrick

said he wanted to go to St. Patrick High School instead of

Derrick was attracted by St.

Patrick’s nationally-regarded basketball program. In the past five

coach Kevin Boyle wasn’t on board with Derrick’s

“He came as an eighth grader and he

was dying to go to St. Pat’s. Personally I didn’t think he was good

called. He was always a hard worker and had a lot of self

confidence in his game.”

But Derrick enrolled at St. Patrick.

for a long period of time.

career at Plainfield High School, but never reached the level of

time for other activities. He got mixed up with a rough crowd and

started hanging out on the streets.

Mike Gordon said he and his wife

Sandra started blaming themselves for Darryl going down the wrong

kids when they do well,” he said. “On the other side, they tell

you, ‘We know you did everything you could. It’s not your

take credit for the positive stuff, but not take the blame for the

Derrick put blame of what happened

to Darryl on his shoulders.

“I tried to talk to him, but I

didn’t talk to him as much as I could have,” Derrick said. “I could

have done a lot more to prevent the situation, but things happen

Derrick had trouble opening up to

people in the aftermath of it all. The heartache that he was

feeling about missing his brother was kept bottled up

me so much inside.”

Derrick then went through a three-

to four-month period when he wasn’t eating enough. His mother

Sandra didn’t call it depression, but said he was visibly hurting

and lost a lot of weight.

The teachers at St. Patrick had no

idea what was causing it.

to come out with it. Then Derrick — that’s when he really started

to open up. I always told him if you talk about it, you’ll feel

“They were real close. They did

everything together. It was like taking half of him

Boyle said it got so bad at one

point that Derrick considered transferring from St. Patrick to

Plainfield High School to be closer to home.

“To his mom’s credit, she made him

stay,” he said. “That was a life-changing decision for

Derrick eventually got to visit

Darryl, and they exchanged letters back and forth. Once that

And when he finally saw Darryl

just laughed and talked and he was just so happy. After that he

went on to school and things just started getting better for

year of high school at St. Patrick. He had already signed his

National Letter of Intent to play at WKU, but this was still a

chance for him to make a name for himself.

After what Boyle called a “horrible”

Whitney Young High School at the City of Palms Tournament in Ft.

Derrick emerged as one of the key

But there were times throughout the

season when thoughts of Darryl would creep back into Derrick’s

mind. Boyle had to balance being a tough coach while also being

understanding of the fragile emotional state that Derrick found

HBO made a documentary on St.

him trying to make that balance, although it could seem a little

harsh because only a clip of the conversation was shown.

His message was that while he and

the team understood what Derrick is going through, they still had a

“One day you’re going to go to work

and your boss is going to feel bad about something in your life,”

Boyle said. “But at a certain point, you need to be accountable to

him and the rest of the team, or they just can’t carry you if you

“It was that type of message. We

Gordon has now had a few months to

get acquainted with Bowling Green, which is roughly 850 miles from

his home in Plainfield, N.J.

He hasn’t seen his brother since

May, and he’s not sure when he’ll be able to next. Darryl moved

from a youth correctional facility in Bordentown, N.J., nearly two

He knows he’ll see him eventually

is set to be released from prison.

But until then, Derrick’s life and

basketball career are focused on what his brother last said to

“He just wants to see me succeed,”

Derrick said. “He knows how badly I like to win and how bad I want

to get to the next level. He told me that, no matter what, just

“When he told me that, I stuck by

it. Now I’m just on a mission right now. I’m sure a lot of people