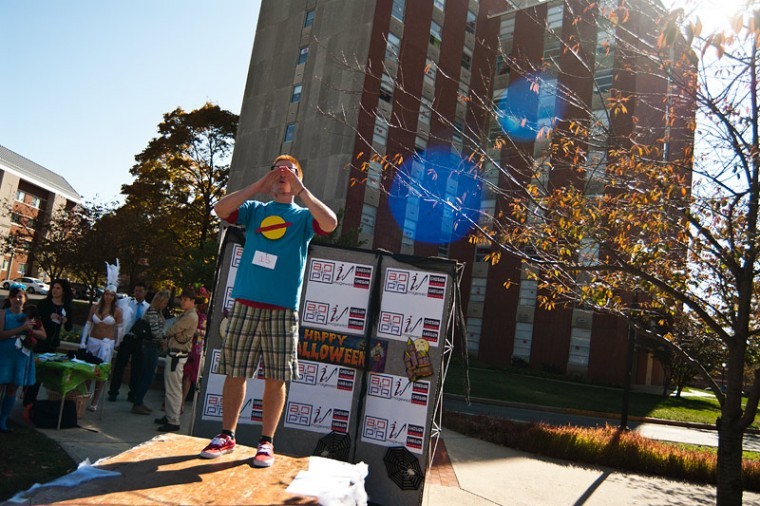 Louisville junior Jeff Franklin Chuckie dresses as a character from the Nickelodeon cartoon Rug Rats. Franklin was one of many costume dressed contestants who took part in Imagewest's First Annual Halloween Costume Contest and Catwalk outside Downing University Center.

The Centennial Mall was crowded with monsters, movie and game characters on Monday afternoon.

More than 50 people, students and staff members participated in the First Annual Halloween Costume Contest and Catwalk to have a good time and win cash prizes.

“Dress to kill. Dare to scare. Strut your stuff” was the contest’s motto, which was hosted by WKU’s Advertising and Public Relations programs and Imagewest. The event was sponsored by Shogun of Bowling Green.

One of the organizers of the contest was Heather Garcia, who is the director of the only student-run advertising and public relations agency in the nation, Imagewest.

“We pulled this event together in less than about a week actually,” Garcia said. “But it has kicked off very well. People have already lined up to participate and the weather is perfect, so we could not ask for anything better.”

Participants were judged on creativity of their costumes and poise walking down the catwalk.

The first participant on the catwalk was Crystal Bowling, a staff member of Library Technical Services. She has been on campus for seven years, but she said nothing similar to this event had taken place before.

“There is not a lot of Halloween stuff going on on campus, so this is cool,” said Bowling, who was dressed in a pop art theme. “I will be glad to participate also the next year.”

Another contestant was Louisville senior Jacob Stephenson. He agreed the contest was a lot of fun and a good break from classes. Stephenson’s character in this event was Indiana Jones, and he said that this idea came up completely unexpectedly.

“I was at a Halloween store and saw this cool hat,” he said. “I decided I could build a costume around it.”

The Halloween costume contest participants were not limited to people only. There were dogs strolling down the catwalk as well.

Amanda Bass, who works for the WKU Book Store, went on the catwalk accompanied with her dog — a miniature schnauzer named Zoey — who was dressed up as a honey bee.

“She was angry earlier, but now she seems to be excited to be here.” said Bass who was the first place winner. “I think she is a little camera shy.”

Besides many contestants, some spectators were there to support and watch participants.

Bowling Green sophomore Katelyn Sams was one of them. Although Sams said she is not Halloween-spirited enough to participate, she enjoys watching other people and their creative costumes.

“This event lightens up the mood and shows Halloween’s spirit around here.” Sams said. “A lot of costumes are very good. There is a lot of creativity involved in them.”

The costume contest organizers said they are thrilled by the success of this event, and they are looking forward to make this event happen also the next year.

“I am sure this first event, we’ll learn a lot and we will be able to build on top from there,” Garcia said. “We will generate even more awareness for the next year, so we have more campus community participating.”