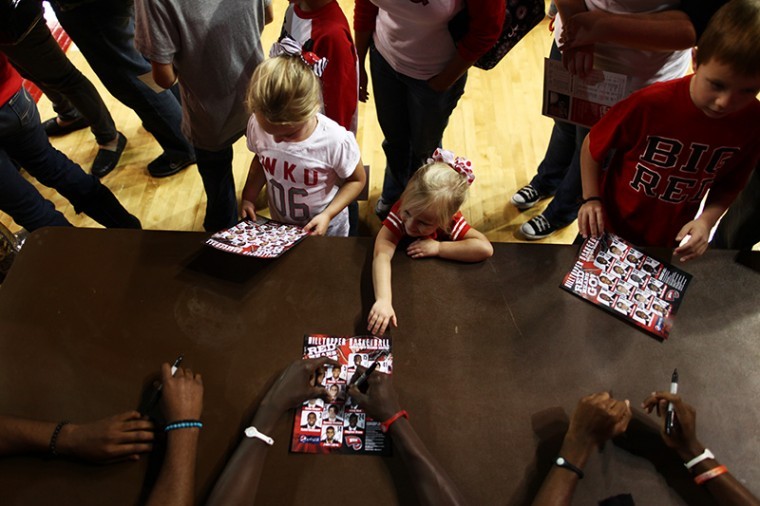 Kennedy Helm, 3, of Bowling Green waits in line for signatures from the men's basketball team during Hilltopper Hysteria on Friday night in Diddle Arena.

The Lady Toppers are looking to have a little more fun this season.

Last year WKU lost its first five games and finished with a disappointing 15-17 record, missing out on postseason play.

“She wants us to have fun playing the game,” Johnson said. “Last year we really didn’t have that much fun playing, but this year we have a great group of girls, great chemistry and I think it’s a lot of fun playing with them.”

WKU will be looking to achieve that team chemistry after undergoing a large roster turnover in the offseason.

She said the early practices have been a time for her and the other newcomers to get a handle of the WKU system.

“So far, so good. It’s been a lot of learning,” Ileana Johnson said. “The seniors and the sophomores have been a lot of help getting us through this and teaching the system.”

Offensively, she calmly stepped up and hit two three-pointers for the White Team in the scrimmage while helping to hold the Red Team just three points over the 10 minutes of play.

“It being my first time in Diddle Arena, I was really nervous,” Ileana Johnson said. “But once I went out and started playing it’s a fun atmosphere to be in.”

Hysteria allowed WKU fans to get their first look at a team that had been practicing daily since Oct. 3, as mandated by NCAA guidelines which allow a team to begin full practice 40 days before its first regular season game.

The Lady Toppers open their regular season Nov. 12 at Diddle Arena when they take on Towson.

Cowles said she’s been impressed with her team’s upbeat atmosphere as they prepare for the season.

“There is so much energy and lots of really positive energy, but there is also a lot of teaching,” she said. “I am very pleased with the senior leadership, and I like just how much energy has been in the gym each day.”

Jasmine Johnson said some strong Lady Topper practices have given her hope for a successful — and fun — season.

“We’ve been pushing it,” Jasmine Johnson said. “I think this will be a good year for all of us.”