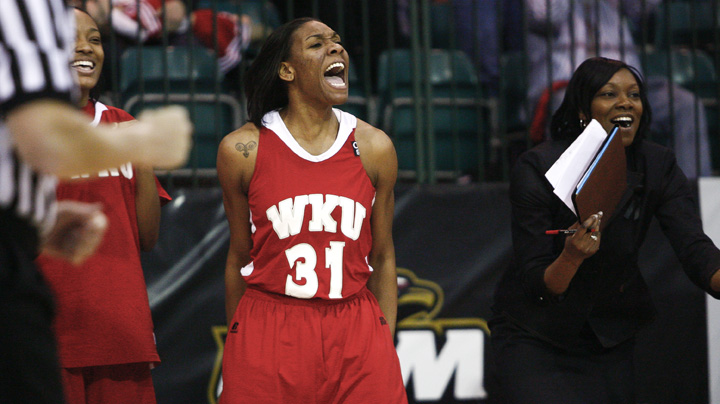 A large WKU freshman class and an experienced senior class have spent the offseason gelling together.

And with the Lady Toppers’ first full week of practices under way, the new talent and the old veterans will be spending even more time around each other.

“I like the balance of it,” Cowles said. “Old versus young, experienced versus inexperienced. But I think it goes back to the quality of our senior leadership and just how strong those individuals are.”

Owens said the veteran Lady Toppers tried throughout the summer to incorporate the freshman class off the court.

“When they first got here we’d have them over for game nights, or cooking, and try to have everyone together doing something other than basketball,” Owens said. “Going to the movies, the mall, it was all about meshing.”

Owens said the seniors preached fundamentals throughout the summer open-gym sessions so freshmen could hit the ground running once practices began.

“In pickup we were trying to teach them our Kansas break and how to set up in that and now they really understand it,” Owens said. “So when we got to the two-hour practices they understood, ‘Oh, that’s why they told me to go here or go there.'”

“I felt like everyone did well and and was out there competing,” said Gooch, a former Franklin-Simpson High School standout. “Like Coach said last night, she doesn’t know who’s going to start, so everyone is competing for a spot.”

There are 39 days left for the Lady Toppers to compete for those starting spots before opening Nov. 12 against Towson.

Cowles was upbeat about WKU’s efforts so far in practice, saying a positive atmosphere has surrounded the Lady Toppers leading into the season.

“Are there things that we’ve got to put in, and things that have got to get done and taught? Sure.” Cowles said. “There’s just a huge list of things.

“But I think right now the whole, entire focus is on teaching and having patience as a staff with these young ladies, because last night I think it was very evident we’ve got 15 young ladies who are proud to wear a WKU jersey.”