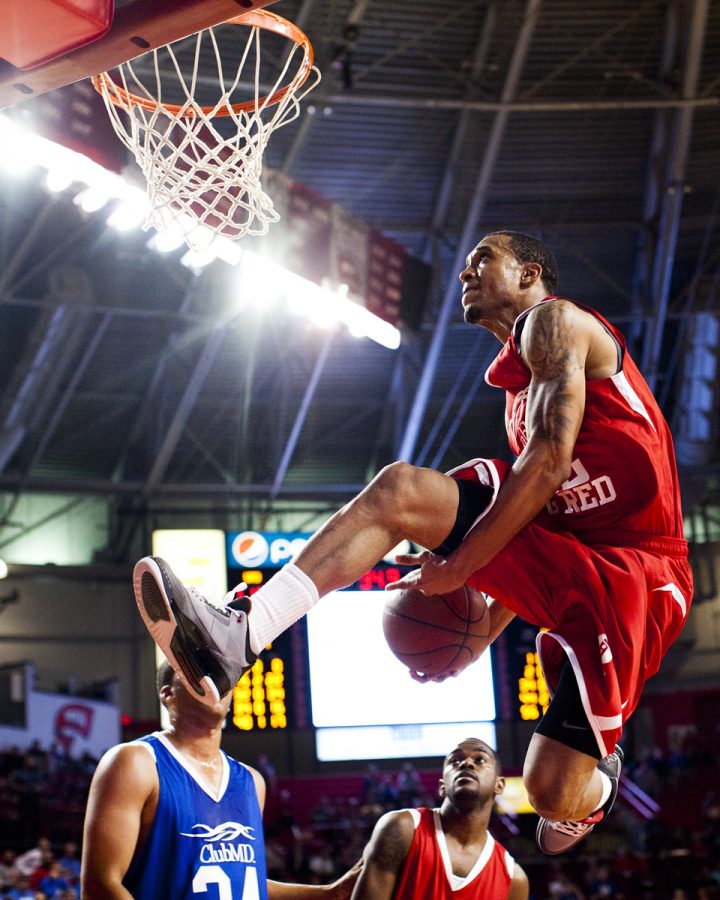 Tuesday night brought back plenty of memories for

those donning red in the “Big Red vs. Big Blue” alumni game at

It was a chance for former WKU players to run through

the tunnel and onto the floor in front of fans one more time.

“I had butterflies the whole time — on my way over

here, getting dressed, then running out there,” former Topper and

current Houston Rocket Courtney Lee said. “Being under those bright

lights in Diddle, it felt good.”

It was a rare opportunity for fans to see past WKU

players square off against past Kentucky players in a charity game

benefit the WKU W-Club and Sharp Shooters Academy — a youth

Once the game itself started, the product on the

floor resembled what fans might have seen during the 2008 season

Lee threw an alley-oop to Jeremy Evans early on in

The red team led most of the way through the first

With the score close, the intensity picked up from

both sides. After a score, former UK player and current Rockets

That’s when Lee caught fire— much like he did

throughout his career at WKU, where he left tied with Jim

McDaniels, who coached the red team, as the school’s all-time

Lee led all scorers with 36 points, including four

made three-pointers, thanks to some sideline motivation from

“He just told me to pick up the intensity,” Lee said.

“It was fun, but we wanted to win this game. It was a pride game at

the end of the day.”

Ravi Moss, who finished as the blue team’s leading

scorer with 34 points, decided to get in on the competitiveness as

After Rogers committed a hard foul, Moss ran up the

court pleading for an intentional foul.

“You all are getting some home cookin’,” Moss said,

jokingly, to the WKU fans as he laid on the scorers table.

Knight, who was scheduled to play for the blue team until he

suffered an ankle sprain in a charity game last night, coached the

blue team. He too tried his best at pleading with an official, to

which the official replied, “I’ve got a red towel in my back

After that, everything seemed to go right for the red

team, as Evans, who took a career-high three three-point shots in a

2007 game against Gonzaga during his college career, drained his

only three point attempt of the night.

“I always tell people I can shoot it, I just don’t,”

he said. “Some guys don’t jump as high as I do, so I just use that

to help the team. I rebound, they shoot.”

Then with about three minutes left to play, the game

turned into a slam dunk contest. Evans jumped from near the elbow

above the rim before he finished the dunk.

“In a game like this, that’s what they come to see —

excitement, having fun,” Lee said. “We just wanted to get out there

Rogers said he was thrilled with the way the event

came together after just a little more than two weeks of

“The greatest thing is that it seemed like a great

experience for these fans,” he said. “Being with the guys that we

experience. We all had a pretty amazing feeling when we ran out of

that tunnel again. It kind of brings back all kinds of

One of those memories was Rogers’ buzzer-beater in

Drake and eventually to the Sweet 16.

When asked if he and Tyrone Brazelton, who started

for the red team, would consider recreating “The Shot,” Rogers said

the idea of that had been brought up several times.

“I think I only need to shoot that one once,” he

said. “People need to remember that the right way.”

Winchester, along with several other players on the

red team, said they hope this type of an event becomes an annual

outing, be it against UK players or just players from Kentucky in

“This year, obviously with the lockout it helped,” he

said. “This is something we would love to do. If we could have an

event like this, it would be great every year to get everyone back

Rogers didn’t say for certain whether or not he’d

personally organize other similar event, but said this one ranked

right up there with “The Shot” in his all-time memories at WKU.

“Not just playing in the game, but these last few

there,” he said. “That’s what it’s all about to me — bringing all

the guys back, even the guys that are older.”