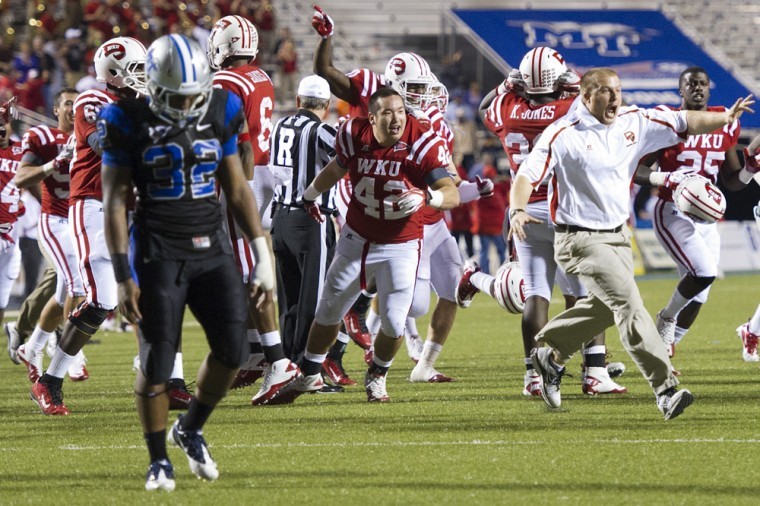 WKU players and coaches rush the field after beating MTSU in double overtime at Floyd Stadium on Oct. 6, 2011. WKU won the game 36-33.

It was a big first step for the Toppers, but Head Coach Willie Taggart won’t be breaking out the champagne and party hats just yet.

“If we stop and cheer and party, then we’re going to fall off that cliff, and that’s a long way down,” he said. “We want to stay focused on the journey and not get caught up in partying and celebrating, because we haven’t done much of anything — we’ve just won one ballgame.”

The Toppers came into the game 0-4, and it looked for much of the night like the Toppers would leave Murfreesboro remaining winless.

WKU missed chances throughout the game to score points, as redshirt freshman receiver Joel German dropped a ball in the end zone what would’ve been a touchdown pass and senior kicker Casey Tinius went 0-of-3 on field goals.

Trailing by three in the second extra period and facing a third and 10 at the MTSU 25, Taggart called a draw play for senior running back Bobby Rainey.

Rainey barreled ahead for 11 yards, getting a first down to keep the drive alive.

It was the Toppers’ first win over rival MTSU since 2007.

Taggart said the attitude around the team has “been a little more upbeat” since the win Thursday.

“Our guys know that we’ve got to make this a habit,” Taggart said.

The Toppers have a chance for their second straight road win when they travel to Boca Raton, Fla., for a league contest with 0-5 Florida Atlantic.

Taggart, who has spoke in the past of his team needing a short memory to bounce back from losses, said the Toppers will need to move on just as quickly from the MTSU win.

Taggart said there are still things that need to be corrected, especially in the kicking game.

“At the end of the day, it’s on everybody on that unit to take pride in it,” he said. “And it starts with practice. We can’t let those little things go by.”

Junior defensive tackle Jamarcus Allen agreed with his coach, saying WKU will need to move on from the win and focus this week in practice to get ready for FAU.

“It was a good win, but we’ve got to act like we’ve been there before,” Allen said. “Got to get back to work on the road to a Sun Belt Conference championship.”

One benefit to WKU may be the fact that Saturday’s game is on the road.

Dating back to 2010, the Toppers have won three of their last four road games.

Jakes said that, for a team that hasn’t won a home game since 2008, the Toppers loosen up a bit on the road.

“Something at home just gets under our skin,” Jakes said. “But when we’re away, we just play with no fear and don’t worry about all the outside things. We just play.”

With a win under his team’s belt, Taggart said he thinks his team can build off the success and get some more victories.

“We’re starting to understand those little things now,” he said. “We’re getting better at some things, and if we do those consistently enough, we’ll win a lot more ballgames.”