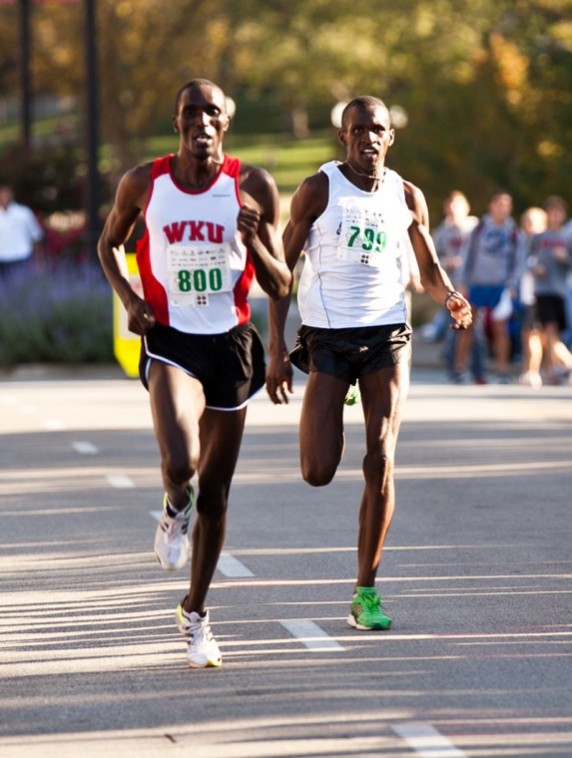 Former WKU cross country runner Patrick Cheptoek participates in the Medical Center 10K on Saturday morning. Cheptoek lost the race by a tenth of a second in a photo finish.

Cheptoek finished a tenth of a second behind Reuben Mwei, who eked out a win after Cheptoek led much of the race.

Saturday marked the second time Cheptoek has run in the Medical Center 10K.

“This year I was much more ready to handle any competition that comes,” Cheptoek said. “I definitely trained for it more. It was a little disappointing, especially the fact that I was so confident I had won the race.”

Despite not finishing first as it appeared he would, Cheptoek still improved on last year’s results in which he finished fourth overall.

“It’s something that you expect, and it’s a lesson for an athlete,” he said. “I definitely still had enough energy to kick, especially the last 50 meters. If I had looked back and saw him coming I would have kicked and I think I would’ve won the race.”

Cheptoek said he runs these types of races not only for himself but to try and boost the confidence of fellow athletes, including those that are current WKU cross country runners.

His athletic eligibility ran out in the spring of 2010 but he continues to train with WKU cross country runners.

“It’s a very big boost for them, especially when they see my performance and we are training together,” Cheptoek said. “It gives them a heart to compete knowing that, you know, they can do anything.”

Somers and Walker are two of several runners who stayed back from pre-nationals while the varsity team had already left.

Walker said he and the other runners decided to run the 5K instead of the 10K just in case any one of them were called to run at pre-nationals.

“We decided to get out and run a race and picked the 5K to keep it light,” Walker said.

“We didn’t want to go more than two weeks without racing,” Somers said. “It was a good workout to keep us ready in case we run conference in two weeks.”

Somers said it’s also an opportunity to show WKU cross country’s support of community events such as the classic.

“It’s great to get out there and get involved in the community and help out the local races,” Somers said. “It’s good to show the community that Western supports what they’re doing.”