Three keys to a WKU victory over MTSU 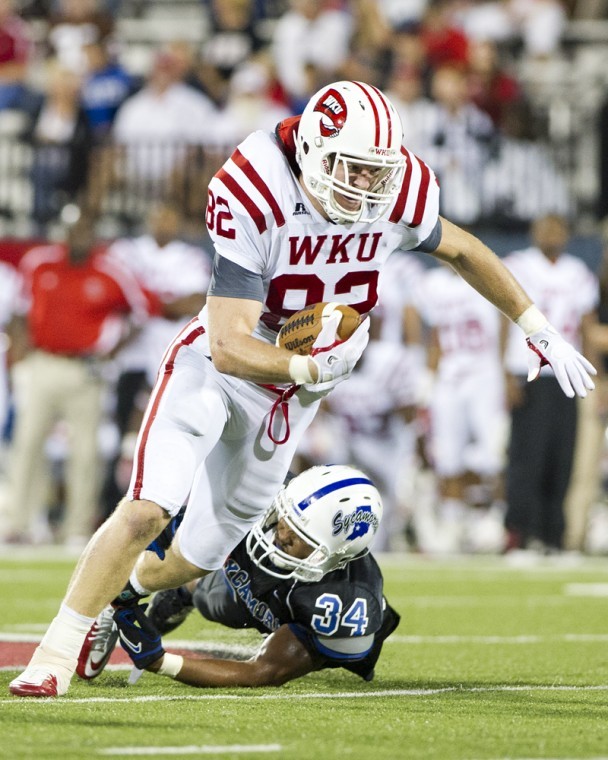 Tight end Jack Doyle stretches for a 10-yard gain after catching a short pass against Indiana State in the second quarter at Smith Stadium during WKU's 44-16 loss. Doyle could be an impact player in WKU's game against MTSU on Thursday.

WKU (0-4, 0-1 Sun Belt Conference) goes on the road to Murfreesboro, Tenn., to face league rival Middle Tennessee State at 6:30 p.m. tonight. The Blue Raiders have defeated the Toppers in three straight meetings. In order for WKU to snap that streak, and get its first win of the season, the team will need to at least do these three things:

1. Get Jack Doyle the ball

In a year when WKU has a young and inexperienced receiving corps, having a veteran tight end like Jack Doyle is a strong asset for the Toppers. But the junior has just 13 catches for 127 yards four games into a season in which he was named to the Mackey Award watch list.

If junior quarterback Kawaun Jakes can get Doyle the ball five or six times tonight, it will occupy the MTSU safeties and open up some one-on-one matchups outside for the WKU receivers.

The Blue Raiders have struggled in key short-yardage situations during their last two games. Against Troy two games ago, sophomore quarterback Logan Kilgore was stopped short of the marker on third and fourth down carries inside the Trojans’ 10-yard line. MTSU eventually lost by a field goal.

Then in the second quarter against Memphis Saturday, the Blue Raiders recovered a fumble inside the Tigers’ five-yard line, but couldn’t convert the turnover into points. MTSU won, 38-31, but only after a big second half comeback. The WKU defensive line played well against Arkansas State Saturday and making a goal-line stand or two tonight could go a long way in determining the outcome.

3. Replace Andrews in the return game

Sophomore running back Antonio Andrews hasn’t put up big numbers this season offensively, with just 10 yards on nine carries. But he’s been a force as a return man, returning 12 kicks for 351 yards – a 29.2 yards per return average. WKU won’t get the benefit of that production tonight, as Andrews will miss the game with an ankle injury.

Look for sophomore Tyree Robinson and freshman John Evans to fill in as the Toppers’ return men. Robinson has averaged 17.2 yards per return, while Evans has averaged 27.7 yards. They’ll need solid returns, and most importantly, no kick return muffs and fumbles, to put the WKU offense in consistently good field position.