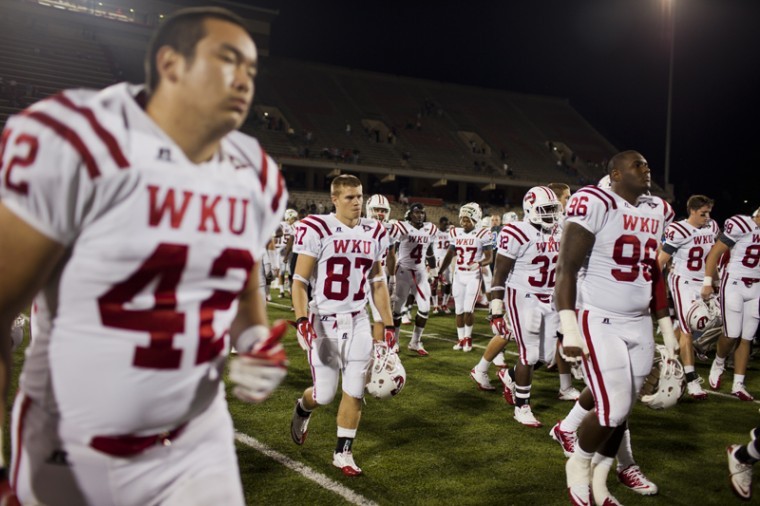 WKU players walk off the field after shaking hands with Indiana State players after their game on Saturday. WKU lost 44-16.

Following a Sept. 10 loss to Navy, Taggart said his team needing to develop a “killer instinct” to compete against Football Bowl Subdivision competition.

But after the Toppers’ loss to Football Championship Subdivision opponent Indiana State, Taggart said his team is lacking leadership when it matters.

“What I want from our football team, other than playing fundamentally sound and being physical, is I want someone to step up on game day and be a great leader,” he said. “We still don’t have that yet, and that’s disappointing.

“We need someone to go out and carry this football team on their back, and make plays that they’re capable of making…I think they’re on our team, they’re just not doing it.”

Jakes comes in as backup

Questions as to who WKU’s starting quarterback would be Saturday weren’t answered until redshirt freshman Brandon Doughty trotted onto the field to a stadium full of cheers.

But after Doughty was injured on the team’s first series, junior and former starter Kawaun Jakes was back under center.

He had his best game of the season, going 22-of-30 for 237 yards with two touchdowns, but throwing an interception and losing a fumble.

“He didn’t play well enough. We lost,” Taggart said of Jakes. “I don’t think anyone played well. We lost the ballgame.

“He had some critical turnovers and those things have been haunting him since he’s been here…We’re not going to have a good football team until we start taking care of the football.”

Jakes’ fumble was one of four total fumbles, three of which were lost that day for WKU.

But it was Jakes’ interception was especially costly for the Toppers.

Trailing 14-3, WKU had the ball on the Indiana State 24-yard line with less than a minute remaining in the first half when Jakes delivered a pass right to the waiting arms of Sycamore defensive back Larry Carter.

The interception not only cost the Toppers a chance to close the deficit before halftime, but Carter’s resulting return deep into Topper territory set up a field goal that gave Indiana State a 17-3 lead.

“He was a little late with the throw. He held it a little long,” Taggart said of Jakes’ interception. “(Carter) stepped right in there and picked it off. He was late.”

The ‘first season’ comes to an end

An 0-3 start certainly wasn’t the way WKU saw itself beginning the season.

But as bad as the Toppers have looked in their first three games, they have yet to begin Sun Belt Conference play.

That means WKU’s well-publicized preseason goal of a Sun Belt championship is still in play.

“If there’s one positive out of this game, it’s that our goals are still there,” Taggart said. “This first season is over with. We were 0-3 in that season. Now we start a new season.”

The Toppers now have a bye week before beginning Sun Belt play Oct. 1 at home against Arkansas State.

When asked if the off week was coming at a good time for the Toppers, Taggart said, “oh yeah.”

“It gives us a really good opportunity to evaluate every single position,” he said. “We’re going to work, because that’s the only way we’re going to get better.”

When Miles was named the Sycamores’ head coach in 2008, he inherited a losing streak that eventually stretched to 33 games.

Taggart was in a similar situation when he became the Toppers’ head coach in 2010, taking charge of a team with a losing streak that was finally snapped at 26 games.

Miles said he hopes WKU administration and fans stand behind Taggart and the rest of the Toppers’ coaching staff.

“I know what they’re going through and I know where we’ve been,” Miles said of Taggart and his staff. “I think they’re doing a great job coaching here. I think they should be given every opportunity.”

Senior running back Bobby Rainey has made another etch into the WKU record books.

Rainey rushed for 105 yards Saturday, tying the school record for most consecutive 100-yard games, with eight.