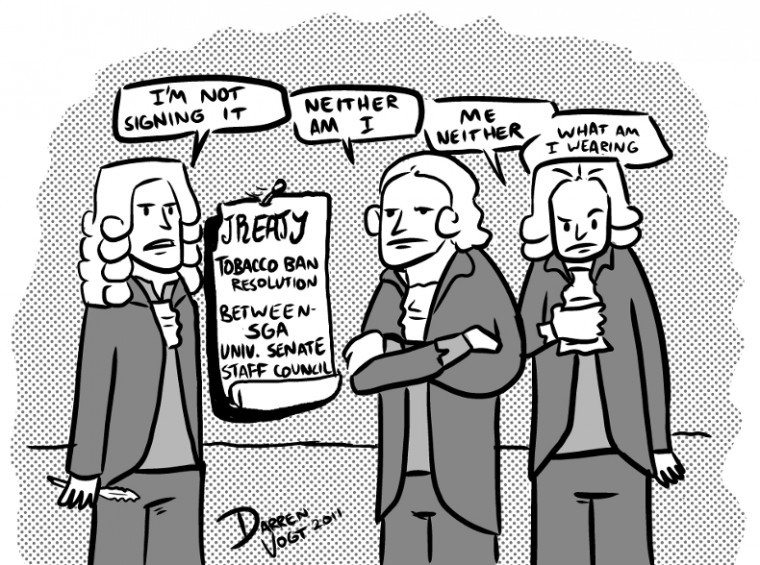 The Issue: WKU’s governing bodies (Student Government Association, University Senate and Staff Council) have debated on a potential tobacco ban for months. They all have their own interests, though ultimately it’s the students who will feel the impact of the resolution.

Our Stance: WKU’s governing bodies should come together and write a standard resolution. They should make compromises because their interests and agendas differ from one another, and they should also provide an open forum where students can ask questions and have their own say in a tobacco-free campus.

The battle over the tobacco ban consistently rears its controversial head within the WKU community, and the Herald thinks it’s time to finally settle the issue.

For implementing any kind of standard resolution regarding a tobacco ban, all governing bodies must agree on passing the resolution. President Gary Ransdell has said that much multiple times.

Recently SGA’s tobacco-free resolution passed at their Sept. 13 meeting where Kaylee Egerer, Speaker of the Senate, said the SGA supports the ban “if and only if” the two-year requirement to live on campus is eliminated.

The resolution states: “Imposing a tobacco ban while requiring students to live on campus is unrealistic.”

Like SGA, the University Senate passed a tobacco-free resolution — not including the two-year clause — last December.

In a previous interview Public Relations Chairperson Cody Murphy said, “After gathering opinions of students, we think that we formatted the best solution to the issues presented to us.”

As of right now, the Staff Council hasn’t passed a resolution.

In February of 2011, Staff Council Chair Diane Carver said Ransdell sent a letter to the council asking if there would be support for a smoke-free campus after the University Senate made a recommendation that other representative bodies pass the resolutions.

Clashing agendas are highlighted by the fact that the majority of those who were against the Staff Council’s resolution aren’t smokers, according to Carver.

While the SGA meetings are open to students, the Herald believes that creating an open forum would help the SGA, University Senate and the Staff Council have a better grasp of what the majority of students want.

Although WKU community members constantly dispute the tobacco-free campus, the bottom line is that the largest population on campus is made up of students.

A forum such as this full of opinions from students could actually lead to the three governing bodies coming together to finally agree upon a standardized resolution.