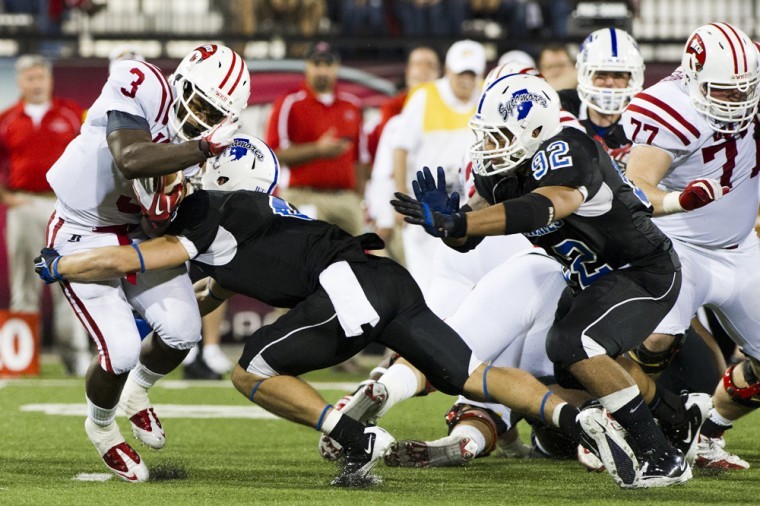 Senior running back Bobby Rainey gets stopped by Indiana State defenders during WKU's 44-16 loss to the Sycamores Sept. 17 at Smith Stadium. Rainey has rushed for more than 100 yards in eight consecutive games, tying a school record.

An 0-3 start wasn’t what Head Coach Willie Taggart envisioned for his 2011 Toppers.

But after a close loss to Kentucky and not-so-close losses to Navy and Indiana State, that’s where WKU stands.

Following a bye week, WKU gets the chance to turn the page from its rough start at 3 p.m. Saturday, when it hosts Arkansas State for a Sun Belt Conference opener.

Senior safety Ryan Beard said Saturday’s game is an opportunity for the Toppers to set aside the early season disappointments and begin a march to their first-ever Sun Belt title.

“All our goals are still intact as a football team. It’s obviously to win a conference championship,” Beard said. “We haven’t lost a single Sun Belt game so we’re still on track to (win the league crown), and I believe we can.”

The Toppers can take a measure of confidence into Saturday’s matchup, as WKU notched a 36-35 overtime win over the Red Wolves last season.

In that game the Toppers forced five turnovers, held the ball for more than 40 minutes and blocked a fourth quarter punt to send the game into an extra period.

After an 0-3 start, Taggart said the Toppers can use last season’s win as an illustration of what happens when they play to their potential.

The Red Wolves are 2-2 so far in their first season under the helm of Hugh Freeze, who was promoted from offensive coordinator to head coach following the firing of former coach Steve Roberts.

Aplin, who threw for 2,939 yards and 21 touchdowns in 2010, has talented receivers Dwayne Frampton, Josh Jarboe and Taylor Stockemer at his disposal.

And when he’s not making plays with his arm, Aplin has the mobility to keep defenses honest, as he rushed for 11 touchdowns a season ago.

“That quarterback is the real deal,” Taggart said of Aplin. “He’s the commander-in-chief of that offense.”

But Aplin has been somewhat erratic this season, throwing more interceptions (five) than touchdowns (four).

If the WKU defensive line can pressure Aplin and force him into some bad throws, the Toppers will have a good chance to notch a win to start their Sun Belt season.

Senior defensive end Jared Clendenin said that he relishes the chance to be able to pin his ears back and pursue Aplin.

“We love to play the run, but being a defensive end, I would be lying if I said we didn’t like going after that quarterback,” Clendenin said. “We need to get some hits on him early in the game.”

There are plenty of additional subplots going into Saturday.

Junior quarterback Kawaun Jakes will be making his first start after being on the sidelines for the beginning of the Indiana State game.

Senior running back Bobby Rainey will be attempting to rush for more than 100 yards for a school-record ninth consecutive game.

And, of course, the Toppers will be looking to snap a home losing streak that now stands at 17 games.

But, most importantly, WKU will be gunning for a 1-0 start on the road to what they hope is a Sun Belt title.

“Our goal is still attainable,” Rainey said. “It’s conference play. It’s time to get it.”