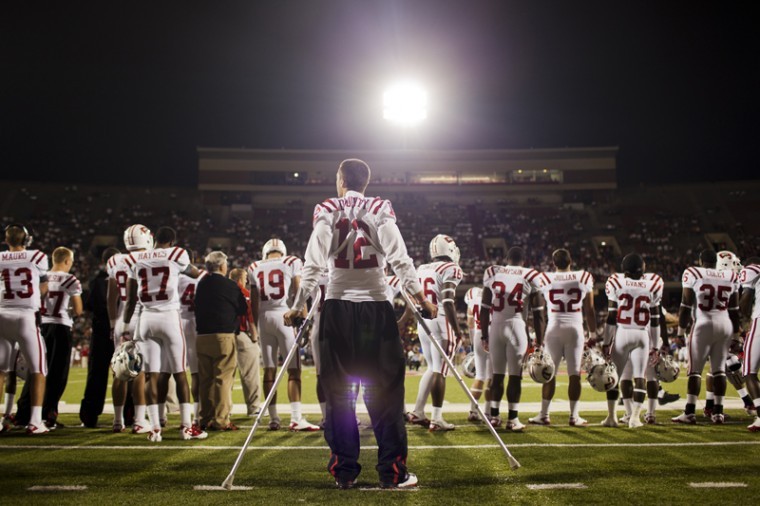 Freshman quarterback Brandon Doughty watches from the sidelines in crutches during WKU's game against Indiana State on Saturday. Doughty earned his first start but was injured on WKU's third offensive play.

A roar erupted from the Smith Stadium stands on Saturday when redshirt freshman quarterback Brandon Doughty trotted onto the field to make his first career start.

But three plays later, Doughty’s day was done after sustaining a knee injury on a third down scramble.

Junior Kawaun Jakes was under center the rest of the way in WKU’s 44-16 loss to Indiana State.

The extent of Doughty’s injury has yet to be announced. Head Coach Willie Taggart said the freshman will undergo an MRI.

“I was planning on Brandon playing the whole game, and it was unfortunate he went down,” Taggart said. “That’s the kind of luck we’ve been having lately.”

It was unknown until WKU’s first offensive series that Taggart would start Doughty over Jakes, as the Toppers’ game day depth chart didn’t list one quarterback ahead of the other.

Doughty replaced Jakes in the third quarter of the Toppers’ Sept. 10 loss to Navy, creating questions as to who would start the Indiana State game.

Doughty finished the day 1-of-1 for four yards, while Jakes went 22-of-30 for 237 yards with two touchdowns and one interception.

Taggart said he told Doughty to keep his head up when team trainers said Doughty would be unavailable the remainder of the night.

“That’s all you can do,” Taggart said. “It happened, and other guys have got to step up.”

Senior running back Bobby Rainey eclipsed 100 rushing yards in a game for the eighth straight time — tying a school record.

Rainey rushed for just 43 yards in the first half, but finished the game with 105 yards total on 23 carries.

WKU’s loss Saturday puts the team at an 0-3 mark to start the season and gives the Toppers a 2-25 mark over the last three seasons.

Taggart said after the loss that he hoped WKU fans would support his team as it searches for its first win — and also to snap a 17-game home losing streak.

“I believe in this team, I’m not going to give up on it, and I hope everyone else doesn’t either,” he said. “I hope our fans and everyone else stays with us.

The announced attendance for Saturday’s game was 15,793. It was also Parent and Family Weekend on the Hill.

“We wanted to win at home,” Taggart said. “We need to do that, and our fans deserve that.

“I appreciate them all showing up and if they decided not to come, I understand that too. It’s on our football team to provide that for them.”

Taggart said that after a strong week of practice, freshman Jesse Roy earned a shot to replace Tinius Saturday.

Roy made his only field goal attempt, a second quarter kick from 40 yards, but also missed an extra point in the third quarter.

Wide receiver Marcus Vasquez was taken off the field late in the fourth quarter with a leg injury. His status going forward is unknown.  WKU now leads Indiana State 14-6-1 in their all-time series. The two used to be Gateway Conference rivals. WKU came into Saturday’s game having won 12 in a row over the Sycamores. Indiana State running back Shakir Bell ran for 221 yards, becoming the first player to run for more than 200 yards against the Toppers since North Texas’ Lance Dunbar went for 215 yards last Oct. 30.  A 70-yard first quarter completion from Indiana State’s Ronnie Fouch to Justin Hilton was the longest play by a WKU opponent all season. Taggart’s record as WKU’s head coach falls to 2-13 with the loss.