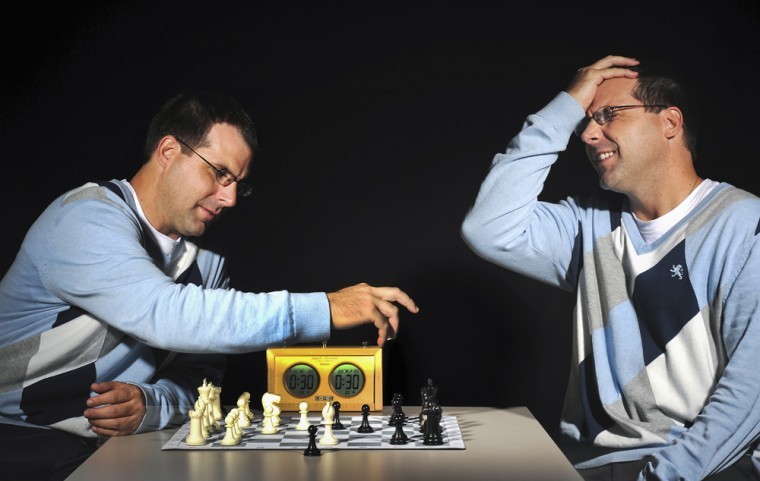 Pendleton, Ind., graduate student Samuel J. Hunt heads the chess club on campus. “I was the first in my family to learn how to play chess,” said Hunt. He has played chess since middle school.

When most people think of chess clubs, they picture people in a room all silently planning their next move as they both lean over a chess board.

While this image may be partially accurate when it comes to the WKU chess club, Sam Hunt, a graduate student from Pendleton, Ind., sees it as much more.

Before Hunt became involved with WKU’s club, he had to learn how to play the game.

Hunt was playing football in middle school when he heard an announcement for the chess club over the intercom and decided to join.

“I subbed and I was terrible,” he said. “I was the last alternate. I had never played at competitions.”

Eventually, after teaching himself the game through the club and by playing against chess masters and the computer, Hunt became a national champion and was known as a “national nerd” after that.

“It was a big deal,” he said. “It was the first time someone had ever achieved that in the community.”

Hunt learned about the WKU chess club in 2007 after Wieb Vandermeer, a physics professor at WKU, asked him for help with a tournament.

“That intrinsic process is what’s lacking in the school systems,” he said. “And when you introduce chess, as research has shown, those kids who play chess end up being better socially.”

Hunt credited chess with helping to improve a child’s standardized test scores, and he said students who play chess have a higher chance of entering into higher learning.

Currently, he is attempting to expand the game throughout the region, including adding programs in all Warren County and city schools.

“We recently had the mastermind conference to train new coaches,” he said. “Nobody knew how to teach the game.”

Hunt said that he received a grant to train 15 new teachers in the city and county school system.

In his first two years of training, 13 programs have been added in the county, and now 22 schools now have chess programs.

Hunt has helped run multiple chess tournaments, including the Halloween Classic in October, the Winter Invitational and the WKU Open.

“For college chess, the intent is to create passion (for chess) in high school,” Hunt said. “Kids come here knowing we have it.”

Vandermeer, who also teaches an Honors Colloquium chess class, said that the game of chess has made a comeback on campus partly because of Hunt.

“He was so active that things sort of boosted up,” Vandermeer said.

Hunt took an interest in setting up a tournament after participating in a small Chess 960, a game of chess not played by the book, that Vandermeer held.

“He was in my physics class,” Vandermeer said. “And he came to my office and said ‘Wow, that was a neat tournament. Why don’t we do it again?'”

In 2008, Hunt succeeded in organizing a large tournament with 70 kids competing, and the game’s popularity grew from there, Vandermeer said.

“Sam is the energy of the club,” he said.

Dorin Bobarnac-Dogaru, a television engineer for WKU, is also a member of the club and has been playing for almost 50 years.

“Chess is not something that can be learned from today to tomorrow,” he said. “It takes years, a lot of study, and one of the main problems that we all have is that we cannot dedicate our time exclusively to chess.”

Bobarnac-Dogaru said he helps members learn about the game by bringing his laptop to club meetings and trying to fuel their interest for chess.

Although Bobarnac-Dogaru has played chess for many years, he said Hunt is the No. 2 player in the club and carries that talent to the community.