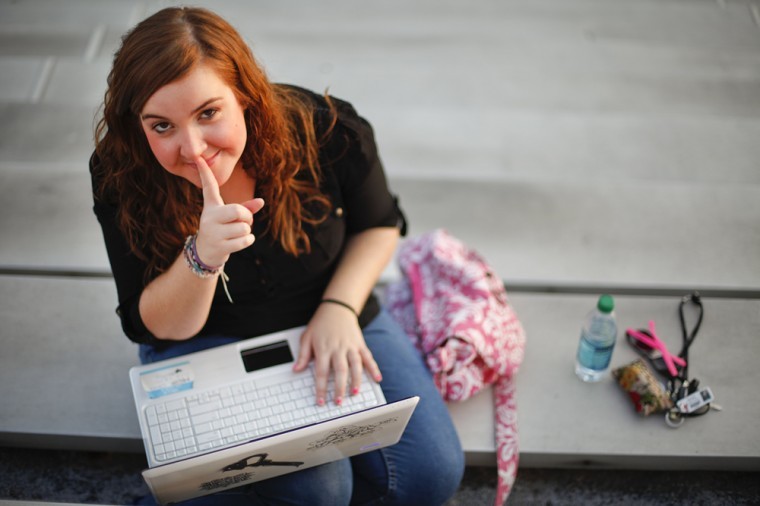 Springfield, Tenn., sophomore Rachel Hoge writes in the online blog she created called The Untamed Tongue. “I’m so passionate about this blog because it can truly benefit anyone,” Hoge said. “My blog is here to support people who stutter, while informing non-stutterers about what this disorder really is.”

Rachel Hoge has a lot to say, but she sometimes has a difficult time expressing herself.

The sophomore from Springfield, Tenn., grew up with a speech impediment and took speech classes to help her stutter.

Hoge said her stuttering, a communication disorder that disrupts the flow of speech, is “like being stuck inside your own mind.”

The disorder makes it hard for even the people Hoge loves to understand her or know how to approach her.

But Hoge found a solution through writing when she started a blog called “The Untamed Tongue” in order to help those who stutter and those who don’t to better understand the disorder.

In her blog, Hoge writes about what stuttering is, how it happens, how it makes her feel and how it affects her life. She also addresses her entries to others with a stutter, trying to encourage them and help make things better.

“One of the biggest troubles is to not let your stutter control you,” Hoge said. “You are a person who stutters, but you’re not just a stutterer.”

Initially she disliked the idea of blogging, but after making a connection with a stuttering foundation in Tennessee, Hoge said that it was great talking to people who knew what she was going through.

“There are not many resources out there,” Hoge said. “But I knew I could help.”

As a teenager, Hoge’s stutter grew worse as she became more conscious about the problem.

“It was so hard to have a speech impediment and not know anyone else who had it who could talk about it,” she said.

Now as a college student, Hoge said her stutter still makes school difficult, because some grades are based on participation, meaning she must start talking.

In the past, the thought of communicating in class made Hoge so uncomfortable that she learned techniques, such as talking differently or changing tones, in order to mask her stutter.

It wasn’t until recently that Hoge realized she needs to stop hiding her stutter.

Hoge said she tells herself “to get over the self-pity, the nervousness and be who you are.”

Elizabethtown sophomore Cailey Giles met Hoge in the dorm at WKU and said that she has seen a big change in her friend since freshman year.

“She is at the point where she has accepted it,” Giles said, “and there is a huge difference in her confidence.”

Hoge said her confidence has grown since she turned to writing as an outlet and became an English major.

“Being a kid, I couldn’t communicate my emotions that well, so I would write to express myself,” she said. “I just loved it.”

Because Hoge will live with the impediment for the rest of her life, she said it can be kind of depressing and hard to accept. However, Hoge said her blog has helped her to change her perspective on her stuttering.

“It’s a part of who you are, and you can use it to make positive changes in the world,” she said.

“You know what you want to say, but you can’t say it. And you have to think so much faster than others.”

Her problem words begin with the letter “F.” So, before saying a word such as freezing, she will make a conscious effort to say the word, “cold” instead, in a process she said is call substitution.

“Certain letters affect people differently,” Hoge said. “It is such a psychological thing.”

Hoge said that she has also received feedback on how her blog has helped others who have the impediment or know someone who has it.

Campbellsburg senior Cameran Smith had seen Hoge’s blog before she realized she had a class with her this semester.

“It was inspiring,” Smith said. “I thought it was fascinating because I had never known anyone with a speech impediment, and it is cool how she is overcoming it and helping others.”

Hoge said she hopes to continue writing about the disorder.

“Because I am a writer, I do know that I have this speech impediment for a reason,” she said.

Hoge continues to stay positive and to actively help others who are battling this problem.

“Instead of wishing for something to happen, just live your life,” she said. “Don’t be afraid to show who you are.”