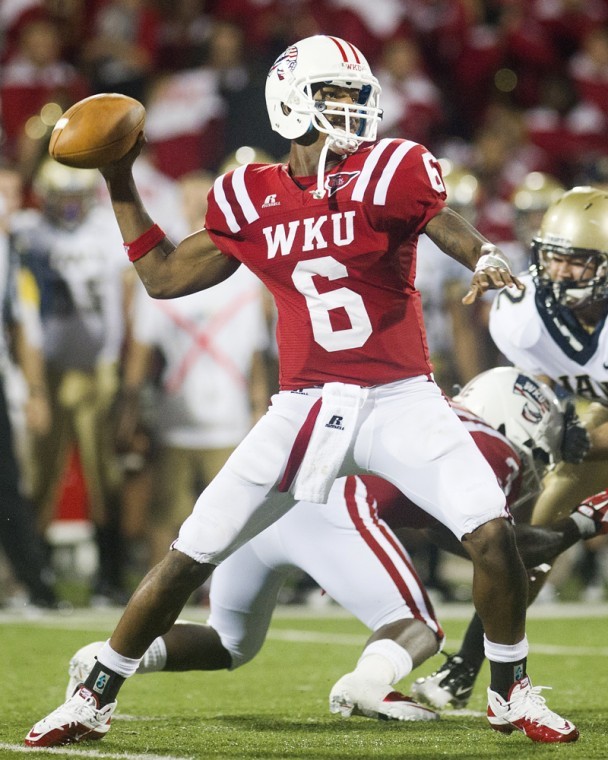 Quarterback Kawaun Jakes (6) looks for an open receiver downfield and throws an interception against Navy in the third quarter at Houchens-Smith Stadium on Saturday evening.

Kawaun Jakes has been through plenty in his three years as WKU’s quarterback.

But the junior had to deal with an especially strange set of circumstances last week.

Jakes, who had been pulled in the third quarter of the Toppers’ Sept. 10 loss to Navy, lost a tight-lipped position battle with redshirt freshman Brandon Doughty for the starting job against Indiana State last Saturday.

It was the first WKU game that Jakes didn’t start since 2009.

But on the Toppers’ third offensive play, Doughty sustained what would later be diagnosed as a season-ending anterior crucate ligament tear.

Suddenly, the recently demoted Jakes was thrust right back into the spotlight.

“I was actually trying to encourage Brandon to come back and be tough,” Jakes said Tuesday before practice. “But it’s just how it played out, and I was ready to go.”

So one week after losing his role, Jakes is back at No. 1 in the depth chart.

He said his confidence isn’t shaken despite his temporary turn as a backup.

“I still have my own confidence. I never just fall down and don’t believe in myself,” Jakes said. “I’m just trying to get better.”

The 6-foot-7-inch, 198-pound Mauro was named the No. 5 rated quarterback in the state of Texas during his senior year at L.D. Bell High School by the Fort Worth Star-Telegram.

“James, he has this swagger about him at the quarterback position where nothing really rattles him,” Head Coach Willie Taggart, a former quarterback himself, said. “I think James is going to be a really great football player for us. He’s just young and needs to get a little stronger.”

But for now, Jakes will be the one called upon to improve a passing offense that No. 101 in the Football Bowl Subdivision, averaging 162.3 passing yards through three games.

The Toppers will be without their No. 1 wideout, junior Marcus Vasquez, who also sustained a season-ending ACL tear against Indiana State.

“They’re great players that put some speed on the field,” Jakes said.

Taggart said after the team’s loss to Indiana State he was glad WKU had a bye the upcoming week.

He reiterated that sentiment Tuesday, saying the “work week” gave the Toppers a chance to fix some problems they might not be able to completely focus on during a normal week of practice.

“We had a lot of mistakes in that ballgame and we’re going to work on correcting those mistakes,” Taggart said.

Many of those mistakes came defensively for the Toppers against the Sycamores.

The defense especially had trouble bringing down Indiana State running back Shakir Bell, allowing him to collect large amounts of yardage off of missed tackles. Bell finished with 221 rushing yards and two touchdowns.

As tackling is a skill all football players are taught early in their careers, Taggart said his coaching staff is working to reinforce those skills rather than teach anything new.

“When they don’t do it in practice you get all over them as soon as they do it,” Taggart said. “If you let it go and continue to let it go, it becomes a habit and it shows up in ballgames.”

Senior defensive end Bo Adebayo said he was disappointed in the defense’s performance over the last two games and wants to see WKU play the way it did against Kentucky, when it held the Wildcats to less than 100 yards of offense for much of the game.

“We see how good we played against a big team that no one thought we’d have a chance against,” Adebayo said. “We came out and we dominated that team. We just need to go back to playing like that and we’ll be alright.”

Lost in the severe injuries to Doughty and Vasquez Saturday was junior tight end Jack Doyle fighting through a sore ankle he rolled on the third play of the game.

Playing on just one good ankle, the Indianapolis native had five catches for 68 yards.

Doyle was held out of practice Tuesday as a precautionary measure.

Taggart, who addressed the need for “great leaders” to emerge on his team after Saturday’s gem, said Doyle can fill that role.

“He was doing that Saturday but he’s got to do it consistently,” Taggart said. “He can’t do it one time and expect for everyone to (be motivated.) He’s got to be consistent with it.

“Our guys are starting to learn now and as coaches we’ve got to teach these kids how to lead.”