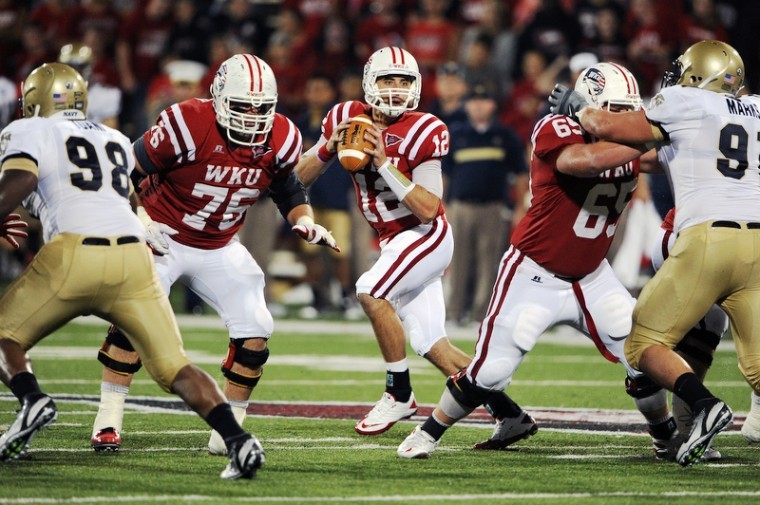 Quarterback Brandon Doughty searches for an open receiver during the second half of WKU's game against Navy at Smith Stadium on Saturday evening. Doughty replaced Kawaun Jakes in the third quarter. WKU lost 40-14.

Brandon Doughty needs to start at quarterback for WKU.

It’s not just because the WKU faithful have been critical of Kawaun Jakes for some time now.

It’s not just because WKU has lost 20 games with Jakes as the starter.

It’s not just because Jakes has totaled six turnovers now in two games — five interceptions and one fumble.

All of those are certainly valid reasons.

But most of all, when Doughty came into Saturday’s game against Navy in the third quarter, WKU looked like a team.

After Jakes fumbled the ball away on an indecisive play in which he pump faked three times before losing it, Head Coach Willie Taggart was ready for a change.

“I just felt like we needed a spark and wanted to try something new,” he said. “We were seeing the same thing that we’ve been seeing from our offense and it hasn’t been going anywhere.”

On his first drive, the offense looked like it was on a mission. Things were clicking.

Doughty simply looked like a college quarterback, even though it was his just first game as a Topper. He looked comfortable, as if he expected to be on the field.

Doughty provided the spark Taggart was looking for and took control of the WKU offense.

In his first drive in a WKU uniform, he went 5-9 for 70 yards, completing three straight passes in a row at one point for a total of 36 yards.

That set up an easy one-yard touchdown run for senior running back Bobby Rainey to cut the score 33-14.

Taggart said he felt that spark on the sideline

“We felt the energy that we were lacking,” he said. “(Doughty) got in and made some plays and we saw that energy come back.

“But Brandon still has a long way to go.”

Taggart has a point.

Doughty had his share of troubles as the game went on, as is to be expected of someone seeing their first action.

Three of his incompletions came on that first drive, and he followed it up by throwing an interception in the fourth quarter that was returned for a touchdown.

Taggart attributed Doughty’s struggles to a lack of focus, which is something he said has been a problem for him.

“He was throwing to guys he had no business throwing to, and he knows that,” Taggart said. “It’s just a lack of focus and he’s got to get better at that.”

Rainey even noted that there was something different about the team once Doughty came in.

If there’s one thing that Jakes has on Doughty, it’s maturity. Aside from the obvious age and experience difference, Jakes showed his maturity in a much bigger way once he was pulled from the game.

Taggart said Jakes was “great” after he was taken out of the game and was on the sideline watching the defense, breaking down coverages and encouraging Doughty.

While Taggart said all of this during post-game interviews, Rainey was nodding his head in agreement.

Taggart didn’t want to assess the quarterback situation after the game, adding that he’d be able to on Monday after he watches the film.

If Taggart decides to go with Jakes next week against Indiana State, it would be understandable. Jakes is more experienced and he knows the offense better.

But if tonight’s showing by Doughty was any indication of what he’s capable of, Taggart might not want to keep him on the bench much longer.