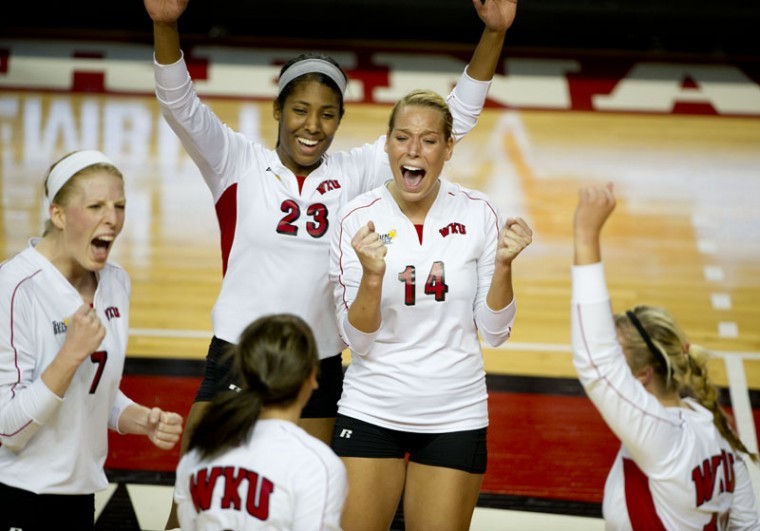 After scoring a point during Friday night's 3-2 win over UALR, Janee' Diggins and Melanie Stutsman celebrate with their teammates. WKU came back from down two sets to win 3-2 and extend its winning streak to 11 matches.

The WKU volleyball team keeps finding new ways to win, coming back from a 2-0 deficit to get the victory in five sets over UALR on Friday.

It was the first five set match of the year for WKU in a match that saw a total of 42 tied scores and 19 lead changes.

Junior defensive specialist Sarah Rogers said that WKU, which improved to 14-1 on the year, kept its confidence despite falling behind early.

“We had the confidence the whole time that we could come back,” she said. “We all knew that we were going to have each others’ backs and everyone was going to do their job. After that second game loss we expected to come right back and play three more games.”

The Lady Toppers won the last three sets in front of a home crowd of 604 who came out to watch WKU’s Sun Belt Conference opener.

Junior outside hitter Jordyn Skinner led WKU with 20 kills, while senior middle hitter Lindsay Williams recorded an additional 19 with a hitting percentage of .349, the highest of anyone on the court.

A few athletes were able to set new career highs over the course of the five sets. Sophomore setter Melanie Stutsman racked up a personal best 56 assists, and sophomore defensive specialist Ashley Potts tied her career high with 25 digs.

Head Coach Travis Hudson said that UALR played extremely well and he was proud of the comeback effort his team put forward.

“It’s nights like tonight that build character,” he said. “This is a team that I’ve said all year has something special about them, and they really showed it tonight.”

Rogers said that Hudson was supportive of the Lady Toppers during the break after the second set when the team was down two sets.

“He came in and said, ‘You know I believe, and I want all of you all to believe,'” she said. “And we all just said ‘yeah, we got this. We need three wins in three more games and sure enough. We got them.'”

The win increases WKU’s winning streak to 11 consecutive matches. The Lady Toppers will try to extend that to 12 tomorrow night at Diddle Arena against Arkansas State at 7 p.m.

Rogers said the win is the first of many WKU is going to need to make it into postseason play.

“It’s our first win in conference,” she said. “We want 15 more and the regular season championship, and if that’s going to happen we have to come ready to play every night.”