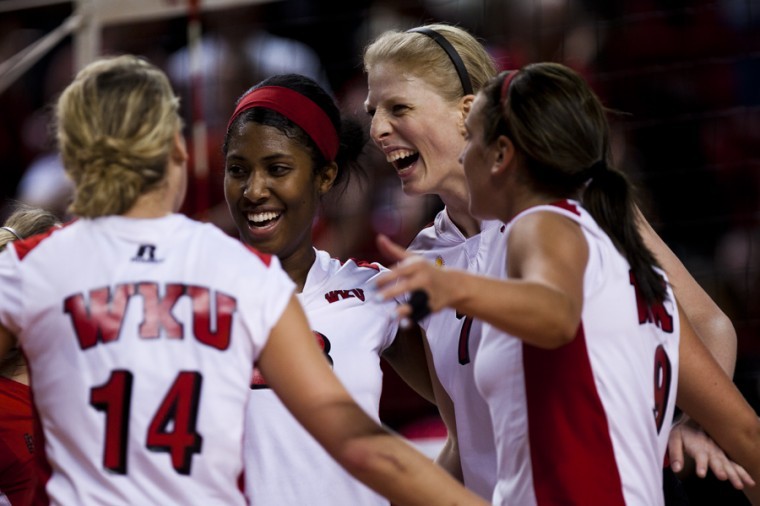 The team joins and cheers after scoring a point during the second set in their game against Arkansas State on Saturday at Diddle Arena. WKU won 3-0 to move to 15-1 and increase their winning streak to 12 matches.

The Lady Toppers earned yet another decisive win tonight at home against Arkansas State, completing a sweep of their two games at home this weekend.

WKU won all three sets against the Red Wolves, bringing their record up to 15-1 on the season and their Sun Belt record to 2-0 after last night’s five-set comeback win over UALR.

The Lady Toppers struggled in the first set, winning 25-21, but took the next two handily to secure the victory.

“I like the way we finished,” Head Coach Travis Hudson said after the match on Saturday. “Early on I think both teams were feeling the effects of long, five-game matches last night and it was a really flat match, but we seemed to find our energy first and I thought that was the big difference.”

Junior outside hitter Jordyn Skinner said that last night’s five-game win over UALR slowed the team down on the court tonight.

“Yesterday was a tough, five-game match, and the first game tonight was a little shaky,” she said. “But we came back and fought through our tiredness in the second and third game.”

Sophomore setter Melanie Stutsman led the Lady Toppers with 36 assists while junior outside hitter Paige Wessel and sophomore outside hitter Janee’ Diggins had 10 kills each.

Hudson said some pre-game preparation might have been the difference on Saturday.

“We actually spent some time before the match tonight with Paige, Tiffany and Mel,” he said. “I brought them in early and we looked at some film and tweaked some things and I think it really showed in their performance tonight.”

WKU’s winning streak has now reached 12 matches, but Hudson said that streak will have one of its biggest challenges on Friday when the Lady Toppers travel to FIU.

“We’re getting ready to play probably the toughest road match we’ll play all year at FIU,” he said. “It’s a long road trip, they’re a very good team, and they’re going to be a challenge.”