NOTEBOOK: WKU glad to be done with Navy 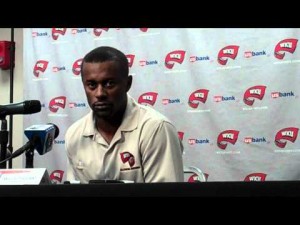 Navy’s triple-option offense has become one of the most dreaded attacks for opposing defenses to face in all of college football.

WKU saw why on Saturday when the Midshipmen accumulated 510 total yards, including 410 on the ground, against the Topper defense in a 40-14 Navy win.

Head Coach Willie Taggart said Monday he was “so happy” his team was done facing the option.

“We’ve got some bumps and bruises. We’ve got a lot of those,” Taggart said. “Let me tell you what — that was a different ball club.

“They were experts at what they do. When they chop block, they chop block, and guys go down. You look at lot of those big runs, and there’s a lot of our guys on the ground…You can simulate it in practice, but it’s not like facing the real thing.”

Senior outside linebacker Ben Duvall, who led the Toppers with 14 tackles in the loss, said Monday he has no concerns with the defense re-adjusting to more conventional offenses.

“It’s definitely different playing the option like that, but we’ll get back to playing our defense the way we always are,” he said.

Sophomore Antonio Andrews was expected to play a “do-everything” role for WKU’s offense this year, but he touched the ball just three times in the Toppers’ season-opening loss to Kentucky after being banged up throughout fall camp.

But Andrews was used heavily on kick returns against Navy and compiled 202 return yards, including one for 75-yards in the second quarter.

Andrews on Monday said he was glad to make an impact on the field but wishes the outcome would’ve been different.

“It’s all good and dandy having those yards, but it’s nothing with having that loss,” he said.

Taggart said after the game he expects to use Andrews more on offense in weeks to come.

Taggart: “We’re going to get there”

WKU has started 0-2, but Taggart said he doesn’t expect his Toppers to stay winless for long.

“We’re not going to put our heads down or anything because you guys think we should,” Taggart said to media members on Monday. “One thing I like is that you guys’ expectations are higher — that you expect more from our football team.

“We’re going to get there, no matter what.”

Taggart also noted that both losses have been out-of-conference games and that the team’s preseason goal of a Sun Belt Conference championship is still on the table.

“It’s two ball games,” he said. “Our goals we set out before the season are still there.”