WKU torches the nets in 4-0 win over Belmont 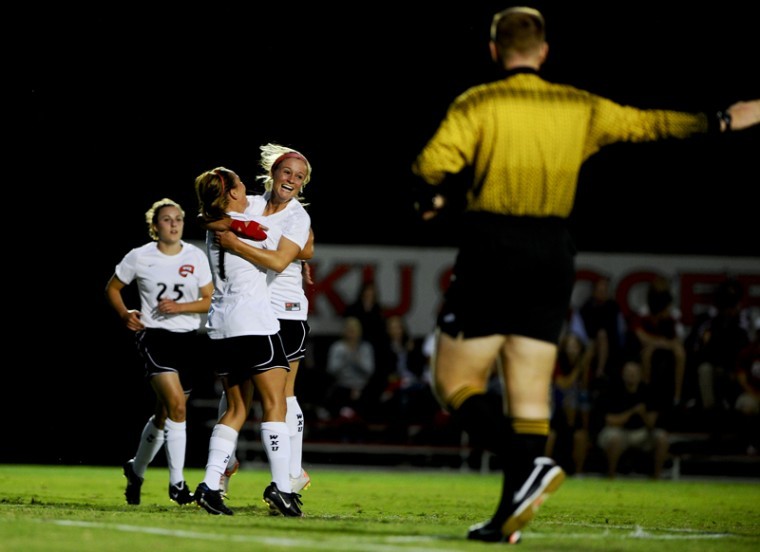 Senior midfielder Kelsey Meyer celebrates with her teammates after one of WKU's four goals against Belmont. The Lady Toppers improved to 4-2 with a 4-0 win over Belmont.

Head Coach Jason Neidell called it a “fantastic individual effort” from Outerbridge, who also had an assist to go with her two goals.

“We talked in pregame about going at their backs hard and fast,” he said. “She took it upon herself to do that on all three goals really.”

Six minutes into the game, Outerbridge was able to beat her defender and slide a shot past the keeper to give the Lady Toppers a 1-0 lead.

Just five minutes later, sophomore defender Katrina Ott passed the ball upfield to Outerbridge, who was able to get a shot off to the far post from about 18 yards out.

The goal gave WKU a 2-0 advantage which it would take into halftime.

“It was just hard work from the team,” Outerbridge said. “Basically we’ve been working all week in practice about getting out there and being physical and working as hard as we can and that is what happened tonight.

“The passes were there and it made me look good so I give credit to everybody else. I couldn’t have done it without everyone.”

Outerbridge was back at it again five minutes into the second half.

Less than three minutes later, senior midfielder Kelsey Meyer played a ball to freshman forward Leslie Chinn, who went around the goalkeeper after she had come off her line and found the net.

“It’s fantastic for us to score four goals, especially with the number of chances we created,” Neidell said. “We didn’t really create that many chances.”

WKU took 12 shots Friday night. Not creating enough chances is something Neidell thinks could hurt the team later on down the road.

“The bigger thing is creating more opportunities to score,” he said. “I think as we get down the road we’re going to need more chances to score even one or two goals in a game.”

Outerbridge said she was pleased with the hard work of the team but added that there were still some areas for improvement that she saw tonight.

“There’s that famous saying ‘hard work beats talent when talent doesn’t work hard,'” she said. “That’s what we did tonight.”

Neidell said the Lady Toppers are still struggling with being consistent. He said he felt like they only played 50 minutes of “good soccer” tonight.

He was quick to praise the effort of junior defender Ali Stahlke, though, for her consistent play this season.

Outerbridge said it’s the “little things” that the team needs to be better at.

“The quick little passes and getting our touches down — things like that,” she said. “I think that if we can focus on those and get those down that we’ll be a pretty deadly team.”

WKU will play Eastern Michigan at 1 p.m. Sunday at the WKU Soccer Complex.