Football Notes: No ‘moral victories’ for WKU after loss to UK 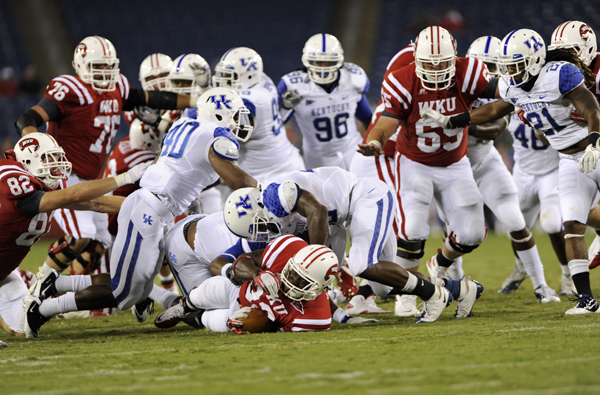 Both WKU and UK struggled to move the ball during the first half, with senior running back Bobby Rainey's 49 yards out-gaining the entire Wildcat offense. But the Topper offense never found the end zone in WKU's 14-3 loss.

When WKU lost its opener to Nebraska 49-10 one year ago, there was talk around the program of a “moral win,” in which losing the game was perhaps overshadowed by positive things the Toppers did.

“We got better as a football team but we didn’t get what we wanted,” Taggart said Monday at the team’s weekly media luncheon. “I’ve said from the beginning that we didn’t fear anybody. We’re going in there to win, and we let it get by.

“I don’t think there’s anyone in our locker room that’s happy. We lost, and we’re tired of losing.”

“If we don’t win, we didn’t do anything,” Taggart said. “We got a little better, but we lost.”

When asked about the UK loss, Brakefield said, “if you have to lose a game, I think we might have done it in the right way.

“None of us wanted to lose, but we kept fighting until the very end.”

Brakefield said the team’s mindset following the 11-point loss to the Wildcats is far different from a year ago, in which UK beat WKU 63-28 in Lexington.

“Not a single bit of this team is the same from last year,” he said. “We might have some of the same players, but we’re looking to win and that’s it.”

As for areas of improvement from Thursday, Taggart said blocking for junior quarterback Kawaun Jakes needs to get better.

“Kawaun missed some throws, we all saw that, but he got hit too many times,” Taggart said. “I counted seven times where he got hit, and they weren’t just tap hits, they were WWF-type hits. We can’t allow that to happen.”

Looking at the Midshipmen

Watching a Navy game can be like looking into college football’s past.

The Midshipmen run a triple-option offense reminiscent of the days before modern spread or West Coast attacks.

Navy has ran the offense to perfection over the past decade, and the results have shown.

The Midshipmen have been to eight straight bowl games and have defeated more BCS teams than any other non-Automatic Qualifier school since 2003.

WKU will get to see the retro offense Saturday when Navy travels to Smith Stadium to play the Toppers.

Of all the WKU players and coaches, Taggart should have the most familiarity with an option offense.

He ran a similar offense during his record-setting days as WKU’s quarterback in the 1990s, and said he enjoyed watching Navy on film.

“It brought back a lot of memories watching on film,” Taggart said. “I was calling out some of the plays and saying ‘I remember doing that.'”

He said he recalled from his playing days how much he hated to be hit as an option quarterback — something he wants his defense to focus on Saturday.

“Anybody that has that ball in their hands, they have to be hit hard,” Taggart said. “I can’t imagine a lot of quarterbacks like getting hit, so we have to hit that quarterback.”

The man responsible for handling Midshipmen quarterback Kriss Proctor in the running game will be sophomore middle linebacker Andrew Jackson.

Jackson notched 12 tackles against the Wildcats Thursday in his first career start.

He said he’s not concerned about making adjustments for the Navy offense.

The WKU defensive line played maybe its best game of the program’s short Football Bowl Subdivision-era against the Wildcats, sacking Newton three times and giving up 2.8 yards per rush attempt.

And the Topper defensive line will get a boost from the return of junior tackle Jamarcus Allen, who missed Thursday’s game while serving a suspension for an unspecified violation of team rules.

“It’ll be great to get Jamarcus back,” Taggart said. “He’s excited. I know his teammates are excited.

“The good thing from last week is those guys played the way they did without Jamarcus. Some guys stepped up to help our football team out, and that’s what we have to get at every position.”

Junior Rammell Lewis started in place of Allen against UK. He recorded one solo tackle and assisted on three more.

Going into the UK game, Taggart had still not announced who had won the kicking battle between senior Casey Tinius and sophomore Monte Merrick.

Tinius eventually got the nod against the Wildcats, and went 1-for-2 on his field goal attempts.

“It’s a long season, but Casey’s our kicker right now,” Taggart said. “We’re behind Casey and expect big things from him this year.”

Sophomore safety Kareem Peterson was a late scratch against UK, as he was nursing a knee sprain.

Taggart said Peterson was out of practice today and that it was “on Kareem” whether or not he’d play Saturday against Navy.

“I have no idea, all I can tell you is that we heal a little different here at WKU,” Taggart said. “To be honest with you I don’t know how long (the doctors) said.”