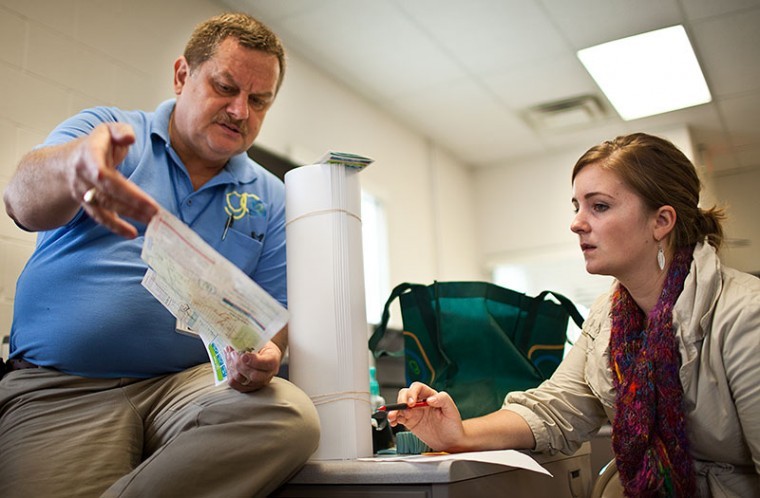 After interning in India this summer, Warsaw senior Sara Moody returned to Bowling Green to begin another internship at the Bowling Green International Center. On Wednesday morning, Moody went to Community Action of Southern Kentucky to obtain Go BG bus passes for incoming refugees. “I’m just really interested in finding out about the resettlement of refugees,” Moody said.

It was a dream Sara Moody never believed was possible.

The Warsaw senior desired to study internationally and dedicate a career to public service, but she never knew about the amount of resources or support WKU could provide.

Moody is now a two-time recipient of the Foundation for Global Scholars general scholarship, which enabled her to spend her summer interning and studying in India.

“Being able to be immersed in another culture and experience challenges have been really beneficial to empathizing with people here, because I understand how it feels,” Moody said. “Working in India really put me out of my element.”

Moody’s 2011 scholarship gave her the chance to spend three weeks with a host family in May, and travel to Dubai. On June 7, she arrived in India where she completed 200 hours of social work with the Madras Christian Council of Social Services while taking a three-week course in social work field placement.

“I love to cook,” she said. “While I was in India, I learned how to cook a few Indian dishes and also taught them how to cook some good southern foods.”

The Foundation for Global Scholars is a nonprofit that works in conjunction with WKU’s Office of Scholar Development. Three times a year the FGS awards four internationally competitive scholarships to students seeking cultural and academic experiences throughout the world.

Moody said it was during her freshman year that her interest was sparked after participating in the ONE campaign with Americans for Informed Democracy (AID). The ONE campaign was a chance to raise awareness about extreme poverty and preventable diseases.

“It ignited my passion towards social work,” Moody said.

These weren’t her first experiences with giving back to the community. Her parents, no matter the circumstance, always encouraged acts of public service as she was growing up.

“She has a really sincere interest in the societies of China and India,” said Jeffery Samuels, associate professor of philosophy. “(The scholarships) were not just a means of advancing herself.”

Samuels serves as an adviser to Moody and wrote recommendation letters for her scholarship. They discussed how her independent study with him in the department of Asian Religions and Cultures could tie in with her experience and work in India.

“Sara’s academic strengths, her passion for service, her clear sense of purpose and her interest in China and India made her an excellent scholarship applicant,” said Audra Jennings, director of the Office of Scholar Development.

Moody is in the Honors College will be graduate in May 2012 with bachelor’s degrees in social work and Asian religions and cultures, aided by minors in American humanics and political science.

She hopes to go on to work in social services or non-profit organizations that help with international populations.