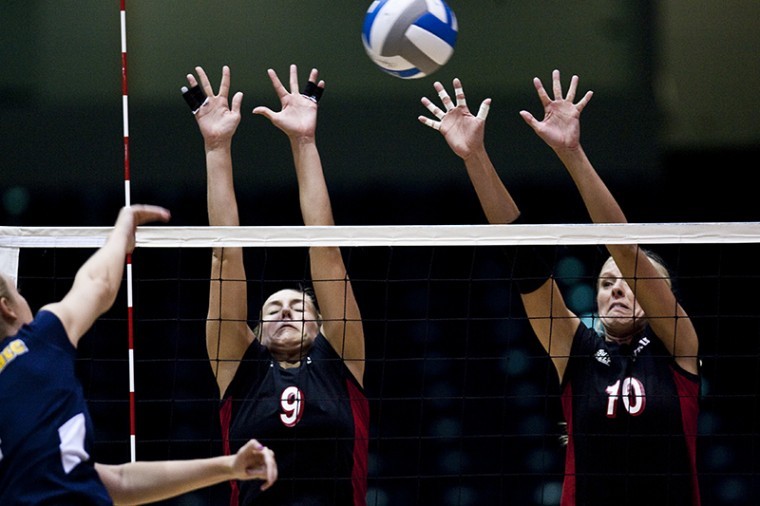 Sophomore outside hitter Paige Wessel and senior outside hitter Lindsay Williams jump for a block the during a match against Murray State at the Belmont Invitational earlier this season. The Lady Toppers are off to a 6-1 start to the 2011 season.

The Lady Toppers continued their strong start to the 2011 season on Tuesday night with a 3-0 win over Lipscomb in Nashville.

Junior outside hitter Jordyn Skinner led all players with 10 kills over the three sets, while senior middle hitter Tiffany Elmore and sophomore outside hitter Janee’ Diggins each added nine to the total. Elmore was the only scorer on the Toppers who didn’t commit an error.

Diggins thought she played better on Tuesday than last weekend at the Kentucky Classic in Lexington, where the Lady Toppers went 2-1.

“Last weekend I really didn’t do too well offensively,” Diggins said. “I felt like I needed to redeem myself tonight.”

Sophomore setter Melanie Stutsman contributed to the win with 32 assists. Skinner also recorded a game-high 14 digs with sophomore defensive specialist Ashley Potts close behind with 11. Potts was recently named the Sun Belt Conference’s Defensive Player of the Week and leads the conference with 118 digs on the year.

Head coach Travis Hudson said he was pleased with how the Lady Toppers performed.

“The thing I’m most excited about is our great defensive effort tonight,” he said. “We’re still a work in progress offensively but we did really well on the defensive side.”

Tuesday’s win marks the fourth time this season the Lady Toppers have swept their opponent.

Their next match is set for Friday when they host Xavier and Wake Forest at the WKU Tournament.

Hudson said he’s pleased with how his team has started the season.

“For us to go 6-1 in our first seven games on the road, I think it’s a doggone good start,” Hudson said.