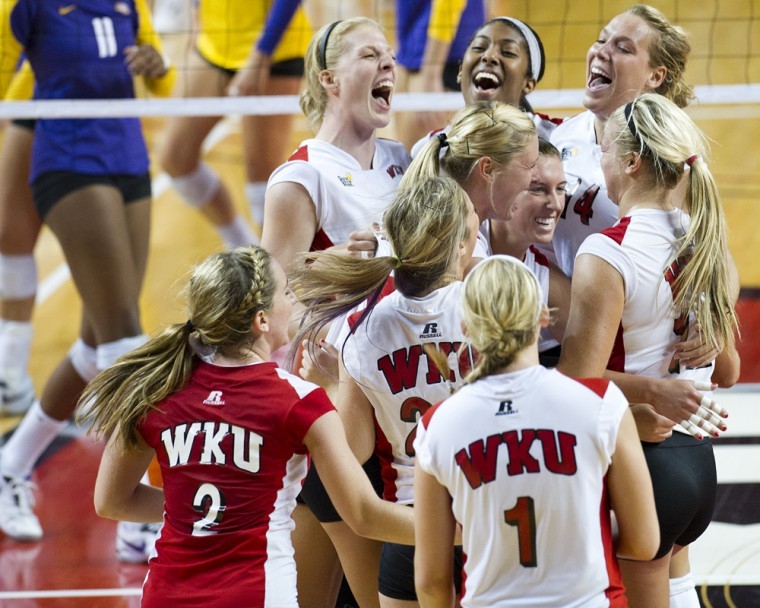 WKU players celebrate their 3-1 victory over LSU at the WKU Tournament in Diddle Arena on Saturday. Undefeated in the tournament, WKU improved its record to 9-1 for the season.

The WKU volleyball team received 20 NCAA top 25 votes in the latest poll released on Monday, raising the Lady Toppers to 31st in the country — their highest-ever ranking.

Coming off a season in which it received an at-large bid to the NCAA Tournament, WKU started the season 9-1 and leads the Sun Belt Conference in kills and assists.

“We’re excited to be recognized nationally, but it’s a testament to all the hard work that everybody puts into this program,” Head Coach Travis Hudson said on Monday. “There’s a lot of things that go into achieving at a high level.”

Hudson, who’s in his 17th year as WKU’s coach, said while the Lady Toppers are aware of the attention they’re getting, they aren’t letting it distract them.

“We pay attention to it, but we don’t worry about it,” he said. “It’s fun to track. It’s fun to be getting recognized by your peers. But we understand at the end of the year it really doesn’t give us anything except something to talk about at the banquet.”

On top of the climb in the rankings announced Monday, junior outside hitter Jordyn Skinner was named Sun Belt Player of the Week for her performances last weekend.

Against Xavier, Skinner finished one kill shy of a school record with 30 kills. In the three matches over the weekend, she totaled 70 kills — an average of 6.36 per set with a .346 hitting percentage.

Skinner said that the Lady Toppers are more focused on winning and getting better than rising in the rankings.

“We’re just going to handle our part in winning and they can handle the polls and what-not,” she said.

“Ten matches in, we’ve been ready to play every night,” Hudson said. “If we come ready to play tomorrow night I think we’ll like the outcome.”