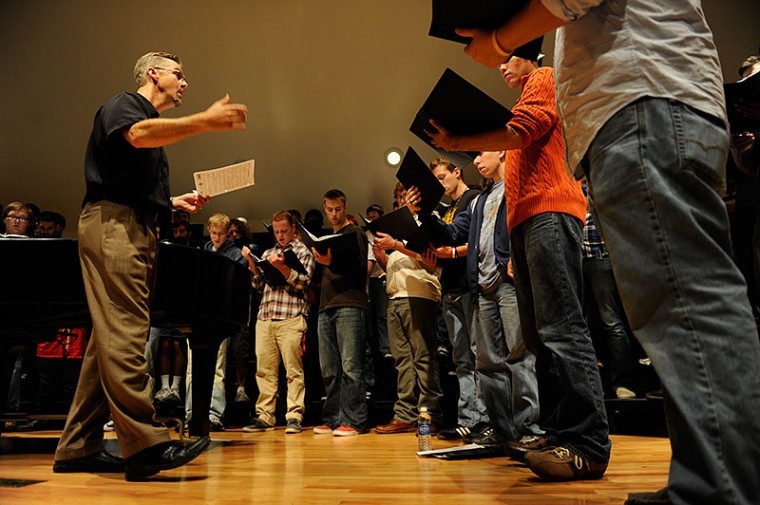 Although the graphic design major wishes to design layouts for a magazine company, his dream is to be cast in the popular television show “Glee.”

Willey currently sings in WKU’s Men’s Chorus and has been a member of choir since his freshman year of high school.

“My mom forced me to join, but I ended up liking it,” Willey said. “I can’t play instruments, but I can sing.”

Choir fulfills one credit hour for students and no audition is necessary. Both Men’s and Women’s Choruses rehearse on Mondays and Wednesdays from 12:40 to 1:35 p.m.

Willey said he always looks forward to choir class as a nice break in his day.

“The people you meet are cool and similar to you,” he said. “We have fun in class.”

Paul Hondorp, the director of Choral Activities and associate professor, agreed about the sense of community among the classmates.

“It’s an immediate connection to a community of people pushing towards a common goal,” Hondorp said.

Both of the choruses perform several times each year and are open to anyone who is interested.

“We wanted a place for anyone in the university who wants to sing without auditioning,” Hondorp said.

Jennifer Adam, assistant professor of music and the Women’s Chorus director, said she liked having the choruses open to all students.

“Many people who are interested, but not music majors, want to sing but are intimidated by auditions,” Adam said. “It’s a place they can feel that they are part of it and enjoy it.”

Louisville senior Kathryn Crimm is part of the Women’s Chorus and said she joined for pure enjoyment since taking music classes isn’t part of her history major.

“It’s a great opportunity to continue music as a hobby,” she said.

Crimm said she loves the directors and the pieces of music the choruses get to perform – even if it’s in another language.

“Performing is always fun,” she said.

Willey also said the time required outside of class doesn’t feel like a mandatory event because everyone always has a good time together. He said it’s nice being with people who enjoy doing the same things as you.

Adam agreed that it’s not a typical class.

“You connect with people in other majors,” she said. “You are involved and contribute and can step out of every day life.”

Adam said that while there are usually around 60 students in each chorus, there is room for more. They also perform a wide variety of songs from classical to contemporary pop.

Although Willey said he would prefer to sing show tunes, he has fun singing the upbeat songs and has learned a lot while in choir. He plans to audition for the WKU RedShirts, an all-male a cappella group.

Willey said that the Men’s Chorus has given him stronger singing skills and more confidence.

Crimm said she has also improved her vocal techniques and sight-reading, but that the greatest part of choir is “people of all walks of life and different disciplines coming together.”

“If you enjoy music, this is a great opportunity to live out that passion,” she said.

The Men’s and Women’s Choruses’ first concert is at 4 p.m. Sunday, Oct. 23 in Van Meter Hall. Admission is $5 for the public and $3 for students.