Football Notes: WKU gets back to basics during bye week 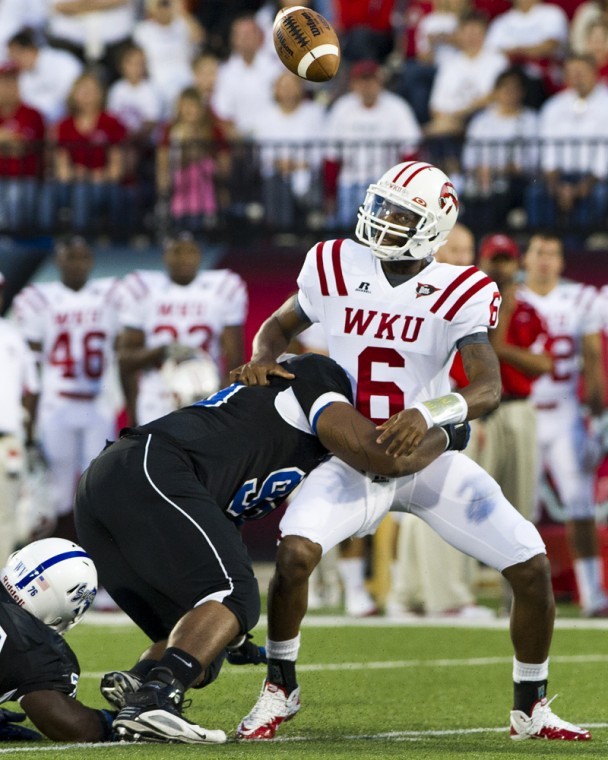 Quarterback Kawaun Jakes fumbles the football while being sacked by Indiana State defensive linebacker Lawrence Young in the second quarter at Smith Stadium.

The rough start to WKU’s season means it’s back to the basics for the Toppers.

After starting the season 0-3, WKU has been using its extra time off to become reacquainted with the fundamentals of the game.

“We didn’t tackle well on defense especially in those last two ballgames,” Taggart said. “Offensively we turned the ball over, putting the ball on the ground.”

WKU is averaging 4.3 turnovers per game.

Taggart said turnovers and lack of fundamentals have been “killing” the team during the first three games of the season.

During the past week WKU has been spending around 20 minutes in each practice working solely on tackling drills.

Senior defensive lineman Jared Clendenin described it as “resetting” to the camp mentality by working and getting back to the basics.

“We really got to focus this week on tackling because they break a lot of tackles that I’ve been watching on film,” Clendenin said.

Taggart said during the bye week the Toppers worked on concepts they wouldn’t normally work on during the season, but he said he’s seeing improvement.

He added that the Toppers simply need to “continue to work.”

“We just have to do things better than what we’ve been doing,” he said. “There’s no need to panic or anything only three games in.”

Senior running back Bobby Rainey said the bye week came at the right time and that the team needs to adjust its mentality on game day.

“We went back to the basics as far as hitting and being live,” Rainey said. “It didn’t matter if we liked it or not — that was what we needed. Practices were intense. We needed that because we have not been playing to our potential.”

Rainey is currently tied for the school record of eight consecutive 100-yard rushing games. If he gains another 100 yards on the ground this week against Arkansas State, he’ll become the lone record-holder.

However, Rainey said he has bigger things on his mind than setting the record.

Taggart said he believes in Rainey’s sincerity when he says winning comes before personal accolades.

“Bobby’s like the rest of us,” Taggart said. “We all want to win. He’s been getting all the accolades and people patting him on the back, but he still feels the same way as me at the end of the game.”

Despite the 0-3 record, Taggart said the Toppers need to move on because they’re only three games into the season.

“We can’t do anything about what happened so we can’t keep dreading on that,” Taggart said. “We’ve got to get ready for Arkansas State.”

“It’s time to get it,” Rainey said. “Everybody knows what is on the line. There are no more excuses. Everybody has to be accountable of their actions.”

After a week in which conference favorite FIU was upset by Louisiana-Lafayette and North Texas upset Indiana, Clendenin described the Sun Belt as “looking crazy.”

“It’s wide open for us,” Clendenin said. “I feel like we can accomplish what we want to accomplish — win the Sun Belt and get to that bowl game.”