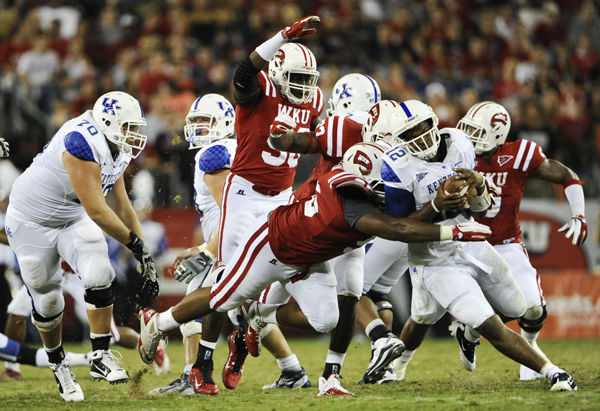 WKU's defense held UK to less than 50 first half yards Thursday night in the teams' season opener at L.P. Field in Nashville.

But the Toppers failed to produce offensively and fell to UK, 14-3.

WKU especially struggled in the passing game, as junior quarterback Kawaun Jakes went 9-for-27 with 93 yards and four interceptions.

Following the loss, Head Coach Willie Taggart blamed the subpar passing performance on an offensive line that allowed two sacks and a number of quarterback pressures.

“It wasn’t Kawaun. Kawaun was getting hit on his back too much,” Taggart said. “We’ve got to do a better job protecting.”

While the WKU passing game couldn’t get going, UK quarterback Morgan Newton struggled just as much.

Newton went 7-for-18 for 97 yards, completed one touchdown pass and threw three interceptions and was sacked three times.

A first quarter interception Newton threw to sophomore safety Vince Williams at the Wildcat 32-yard line set up the Toppers’ only points of the game.

After the pick, the Toppers worked the ball down to the UK 17 but saw the drive stall out after a delay of game call on Jakes. Senior kicker Casey Tinius then hit a 41-yard field goal to give WKU a 3-0 lead.

“He missed some throws, especially early,” Taggart said of Jakes. “We probably should’ve done a better job of getting him in a rhythm early in the game instead of throwing the ball deep.

“He missed Jack who was wide open. That was just a flat out miss.”

Two drives later, WKU gave the Wildcats the ball deep in Topper territory, as UK safety Winston Guy dove to intercept a pass that Jakes had bounced off the shoulder pads of sophomore fullback Kadeem Jones.

The score remained 7-3 deep into the fourth quarter, until the Wildcats finally put two big plays together.

First, Newton scrambled for 58 yards on a third and 14, rushing all the way down to the UK 26. After a delay of game call, Newton hit receiver La’Rod King down the left sideline for a 31 yard touchdown that gave UK its 14-3 lead.

The Toppers attempted a comeback drive, but Jakes was picked off by Wildcat safety by Martavius Neloms on a pass into double coverage. The WKU offense got the ball back once more, and Jakes was again intercepted in the end zone by Guy as time expired.

“Things went as planned — keeping it close into the second half and having an opportunity to win,” Taggart said. “Things went that way for awhile and we didn’t capitalize on some great field position and we let one get away.”

While the passing game had its complications, senior running back Bobby Rainey didn’t post up his usual numbers either. Rainey, who rushed for 1,649 yards last season, ran 28 times for 105 yards, an average of under four yards per carry.

“I put a little bit of blame on me because I missed a couple of holes and I blame myself for that,” Rainey said. “I didn’t perform at the level I was supposed to perform tonight.”

“He set the tone for our defense,” Taggart said. “Ever since that kid has been in there our defense has been amazing and playing like Western Kentucky defense is supposed to play.”

With the exception of Newton’s fourth quarter run, the defense allowed just 35 yards on the ground.

Rainey said he felt that the WKU offense let the defense down Thursday.

“Our defense was amazing,” Rainey said. “And we’ve got to help the defense out.”