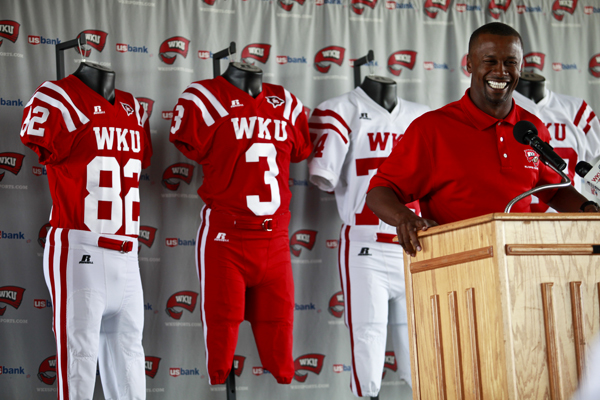 WKU will take the field this fall with what Head Coach Willie Taggart called a more “traditional” look.

The team’s new uniforms were unveiled Friday morning in the Topper Club at Smith Stadium as part of a news conference announcing WKU’s extension with Russell Athletic.

WKU will have nine uniform combinations from which to choose with red, white and grey jerseys and pants.

“I went through and looked at pictures of (WKU Hall of Fame lineman and former NFL head coach) Romeo Crennel just going after someone,” Taggart said. “I saw those uniforms and said, ‘Man, I’d love to get back to those days.’

“It was very important to me as the head football coach here that we keep our tradition and build off our tradition. You see a lot of it in these uniforms.”

“All of our sports are touched in a great way by Russell Athletics,” Bjork said. “The apparel, products and equipment we receive are unbelievable as to what we can provide our student-athletes.”

Bjork said new men’s and women’s basketball uniforms would also be unveiled later in the fall.

Russell Brands, LLC — Russel Athletic’s official name — is a Fruit of the Loom company with corporate offices in Bowling Green.

According to a news release, the new deal gives Russell category exclusivity for licensed apparel at all university bookstores and stadium/arena concessions. That includes stadium and arena signage, public address announcements, in-game video board recognition and commercials during WKU radio and television broadcasts.

As for the uniforms, Taggart said the players loved the new designs. He also said the new look could have recruiting benefits.

“Teenagers see on TV all the time all these different uniforms and you know they’re not going to win ball games for you, but a lot of those kids want to wear them,” Taggart said.

The team’s black uniforms that were used in “blackout” games will no longer be a part of the team’s wardrobe.

But Taggart said he was less interested in potential white, red or even grey-outs than he would be in Smith Stadium sellouts.

“All I want is a sellout and a win-out,” Taggart said. “If we can do that, I’ll be happy no matter which one of the uniforms we’re going to wear.”

Taggart said the Toppers’ new look puts them in competition with other teams that feature different uniform combinations, particularly a certain Pac-12 school known nationally for its various uniforms.

“You have Oregon with all these football uniforms,” Taggart said. “Well, watch out Oregon, WKU’s coming.”