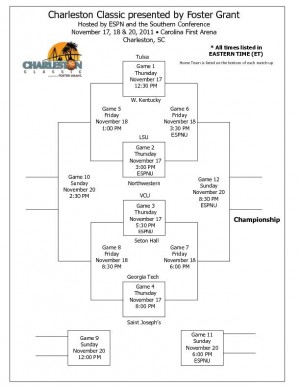 Familiarity could abound WKU in its first two games of November’s Charleston Classic.

The tournament bracket was announced Wednesday, and WKU will face Tulsa – and former Topper D.J. Magley – in the first round on Nov. 17.

Magley played two seasons for WKU and was a part of the Toppers’ 2008 and 2009 NCAA Tournament teams. He transferred to Tulsa before the 2009-2010 season.

The Toppers will face either Louisiana State or Northwestern in their second game. A game against LSU would pit them against former Christian County star Anthony Hickey, who WKU heavily recruited before Hickey ultimately signed with the Tigers.

WKU and Tulsa have met each other five times. The Golden Hurricane hold a 4-1 advantage, with the most recent meeting coming in 1995. Tulsa beat the Tops 73-65 in Bowling Green.

The other first-round matchups are VCU against Seton Hall and Georgia Tech against St. Joesph’s.

WKU is guaranteed at least three games in the tournament and has the potential to meet either VCU or St. Joseph’s, both of which are on WKU’s regular season schedule.

With the way the bracket was designed, WKU can only potentiall play one of the two teams and wouldn’t meet them until their third game of the tournament.

No television information has been released for the game, but WKU Athletic Media Relations said more information for the tournament will be released in the coming months.