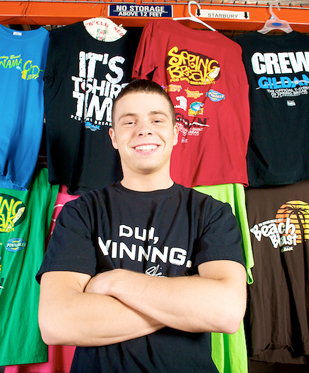 Tyler Webster, an incoming student formerly banned from WKU for planking and promoting his website plankresponsibly.com with stickers around campus, was reinstated this week ahead of his scheduled meeting with the Office of Judicial Affairs.

President Gary Ransdell confirmed to the Herald that Webster has already met with Michael Crowe, director of Judicial Affairs. WKU officials can’t comment further about what happened at the meeting.

“What occurred between Mr. Webster and Mr. Crowe is confidential under the Family Educational Rights and Privacy Act and no WKU official can discuss it,” said Deborah Wilkins, chief of staff and general counsel, in an email. “WKU can confirm that Tyler will be a student this fall.”

FERPA laws are designed to protect students’ educational records from being given to a third party. Though Webster could choose to disclose the information himself, he has declined comment outside of confirming his intent to attend WKU.

Webster tweeted on Tuesday, “It’s all over, i’m going to #WKU !!!” and Facebook event “Plank Support for Tyler Webster” was simultaneously deleted. The event was created originally as a protest to coincide with Webster’s scheduled Monday meeting with Crowe.

Ransdell couldn’t comment on whether Webster’s punishment was fair — Judicial Affairs banned the Bowling Green resident from setting foot on campus in what it called a “trespass order” — but the president said Webster “needed to be disciplined.”

“Michael Crowe did what he needed to do,” Ransdell said. “(He) may have reacted pretty harshly, but that’s alright.

“It was an overreaction by everybody involved,” the president added. “I think it was an overreaction on (Webster’s) part because, first of all, it’s a stupid thing to do. For one, it’s dangerous. Then he put in jeopardy some very expensive art on our campus — art that was not sculpted to support that kind of weight. We’re not going to let anybody vandalize or risk vandalizing that.”

Ransdell added that he was unhappy with how the story played out in the media.

Stories about Webster appeared twice on the Bowling Green Daily News’ front page — once on Aug. 8 to profile his planking hobby, and again last Friday after WKU banned him from campus via a letter from Judicial Affairs. In the original story, Webster was photographed planking with friend Josh Lindsey on the statue of Henry Hardin Cherry outside of Cherry Hall.

The Daily News’ story was picked up across the Associated Press wire last week, and more than 200 people on Facebook indicated they were attending Webster’s support group. The Herald has since followed up with multiple stories.

“I’m sure Michael Crowe didn’t anticipate the kind of media attention that it brought,” Ransdell said. “Had he anticipated that, he might have approached it differently.”

But Ransdell said he approved of how Crowe and Judicial Affairs handled the situation.

“They didn’t know enough information to act much differently,” he said. “First of all, you stop the behavior, then you move on from there. Probably the letter could have been worded differently. But it was pretty straightforward – meet with (Crowe) and see what we need to do from there.”

Webster told the Herald previously that he had to reach out to Judicial Affairs and schedule a meeting with Crowe. In Crowe’s letter, which Webster provided to the Herald, further contact with the university isn’t mentioned.

Although Webster hasn’t commented since WKU lifted its ban, he hasn’t ruled it out.

“I can’t talk about anything right now,” he said Tuesday. “There is a reason, but I can’t really speak on that right now.”