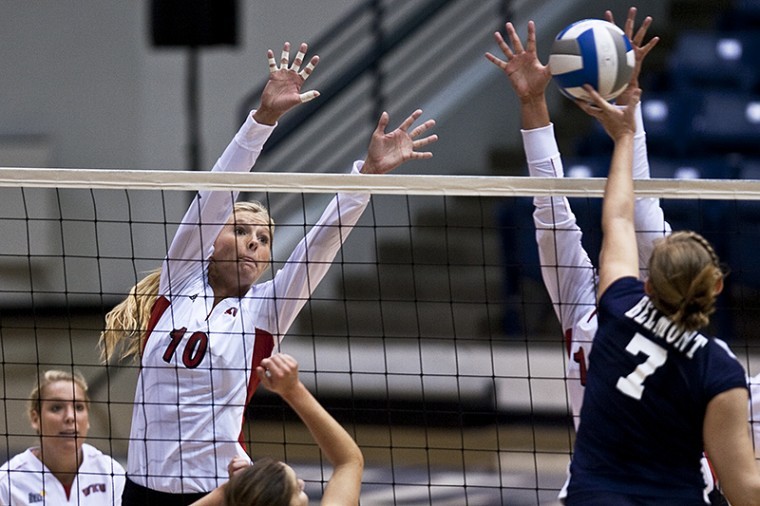 WKU senior Lindsay Williams reaches for a block Saturday against Belmount Bruins sophomore Jen Myer in the third set of the teams' match at the Curb Event Center in Nashville. The Lady Toppers ran their record to 3-0 on the season with a pair of wins, the other against Murray State.

The Lady Tops were sixth in the nation offensively one year ago, but were unable to get past the first round of the NCAA Tournament.

After judging tape of his team’s games against Top 50 opponents during the 2010 season, Hudson put an emphasis on improving the WKU defense this year.

“In those Top 50 matches we still hit .248 and that’s got to be enough to win,” Hudson said. “But opponents were hitting over .300 in those same matches.

“If we’re going to improve as a program we have to do it on the defensive side and we’ve really addressed that.”

Senior middle hitter Lindsay Williams said the Lady Tops’ practices have focused more on the defensive areas of the game.

“It’s been an attitude of, ‘okay guys, let’s get a block, let’s get a dig, let’s get an ace on them and not even let the ball get back over the net,’” Williams said.

The defensive preparation paid off for WKU over the weekend in Nashville at the Belmont Invitational.

The Lady Tops went 3-0 during the tournament, dropping just one combined set in wins over Sacramento State, Belmont and Murray State.

Making the weekend even more significant was the return of senior middle hitter Tiffany Elmore, who suffered a torn anterior cruciate ligament in the NCAA Tournament last season against Cincinnati.

Elmore performed especially well against Sacramento State, with 17 kills and a .607 attacking percentage.

After a weekend playing on the rehabilitated knee, Elmore said she is “good to go” for the rest of the season.

“It was a long recovery and just being back out and playing with my teammates, and not just watching on the sideline, is great,” she said.

Williams, who said the team was “devastated” by Elmore’s injury, agreed it was good to have the 6-foot-4 senior back.

Several other Lady Tops had strong performances over the weekend.

WKU will have another week of practices before taking the court this weekend at the Kentucky Classic in Lexington.

Hudson said he wants to see his squad improve offensively between now and then.

“I don’t think our transition offense was very good,” he said. “Melanie can do better with some of her decision making, but it’s all things you expect this early in the year.

“Hopefully you can win some matches along the way when you’re trying to fix those things.”