EDITORIAL: Home is where the stadium is 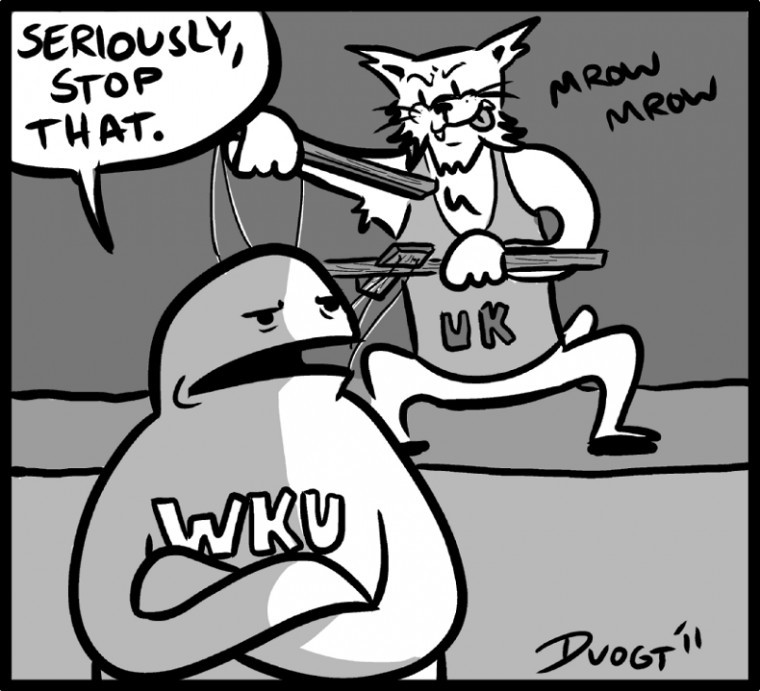 THE ISSUE: WKU’s football team is playing its televised season opener — which counts as a home game — against an in-state opponent in Nashville, on a Thursday, and with a kickoff after 8 p.m. CT. It’s been widely reported that tickets aren’t selling well for the game.

OUR VIEW: To avoid another logistical mess in the future, WKU should not sign contracts for home football games away from Smith Stadium, even if that may affect who the Toppers can schedule.

Times were different when former Athletics Director Wood Selig inked WKU’s four-year deal with Kentucky during the summer of 2009. The Toppers, completing a transition to the Football Bowl Subdivision, were about to embark on their first season as a fully fledged member of the Sun Belt Conference.

Coming off a 2-10 season heading into 2009, WKU didn’t have much to leverage in the way of bringing Kentucky to Bowling Green. And with two wins since the deal was struck, WKU still really doesn’t.

But that doesn’t mean lower-tiered Bowl Championship Series-conference teams, such as Kentucky, can’t play at Smith Stadium, or that WKU should look to play a home game away from home.

For one, WKU has poured millions into expanding Smith Stadium to FBS standards. Second, it’s not unheard of to have the big boys come to Bowling Green. Last season, Louisville’s men’s basketball team came to Diddle Arena, and the Cardinals’ hoops program is widely respected — unlike Kentucky’s football program.

The environment for the Louisville game was scintillating, with fans packing Diddle Arena long before tip off. Who’s to say WKU can’t create a similar experience at Smith Stadium, play on a Thursday night, and still be on national TV?

Instead, WKU and Kentucky are looking at a crowd that, depending on walk-up ticket sales, could have actually fit in Smith Stadium after all. Of course, this is a year in which preseason expectations for the Wildcats and Toppers aren’t high, but those certainly can’t be counted upon to boost attendance given the programs’ histories.

An important sub plot in all of this is that Athletics Director Ross Bjork said playing Kentucky every year “is a priority for us.” Bjork added that to say Kentucky is in control of where WKU plays isn’t accurate, but that their larger fan base does play a role.

It’s in the Herald’s opinion that Kentucky’s fan base should be considered, but not to the point where WKU — now a fellow FBS school — has to play home games away from home, as the Toppers will also do in 2013 as part of the current deal. Really, the same should go for any team. If Army, Navy and South Florida can schedule home-and-home deals with WKU, so can Kentucky.

We understand there are plenty of logistics that go into why WKU is stuck playing on a Thursday instead of a Saturday, or why the game is played so late, or why it’s not in Bowling Green.

But in the end, is all of this really worth it? All to play one of the Southeastern Conference’s perennial bottom feeders? We’ll pass.