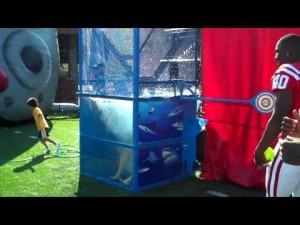 During Saturday’s WKU football Family Fun Day, Smith Stadium was home to not only players, but fans and members of the Bowling Green community as well.

Players and coaches eagerly signed autographs, worked inflatable stations with kids, and conversed with fans on what to expect from the Toppers this season.

Ed Wilson, a Bowling Green native, also said he has high hopes for the Toppers.

“The recruiting class was great and the schedule is more realistic this year,” Wilson said. “We’re excited about that, everybody is.”

Players played cornhole with kids and members of the football coaching staff offered themselves up in the dunking booth.

The first 500 people who showed up received free Pepsi products and popcorn.

She estimated at least 500 more people were at this year’s event compared to last year.

“This year’s turnout exceeded expectations, and is the most participation we’ve had in all years,” Thomas said.

In preparing for next Thursday’s game against UK at L.P. Field in Nashville, fans and players alike said they’re excited and ready to go.

“When we get out there on Thursday we can just play football fast,” said Head Coach Willie Taggart, who celebrated his birthday on Saturday.

Along with seeing new uniforms and a more competitive football team, Director of Football Operations Sharrod Everett said the mentality and culture has changed.