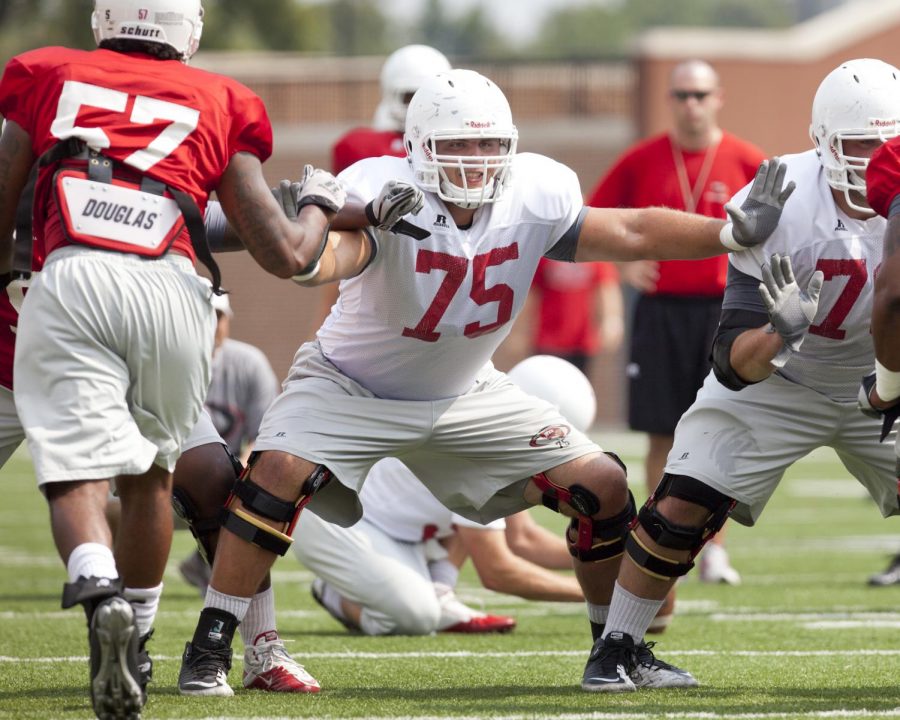 was ready to see how his team would handle a game situation.

Taggart said Thursday that the offense handled the

“The offense came out ready to play and executed

really well,” Taggart said. “Both the running and passing game

“The defense didn’t come out ready to play. We said

it earlier in training camp, when our defense doesn’t play with a

lot of energy and a lot of enthusiasm, they don’t play well at all.

Yesterday was a good point for our football team to see that.”

Taggart’s assessment, saying the defense “didn’t play with the

He said there are improvements to be made before the

Toppers take on Kentucky on Sept. 1, exactly one week from

focus in on what we need to do,” Federspiel said. “We did some good

things but we also need to work on some things.”

Going into the scrimmage, Taggart talked about the

need to solidify the offensive line.

He said Thursday he was most impressed with junior

“We have some guys that have some experience from

playing last year or even starting,” Taggart said. “I could see

a good thing that we have a little depth.”

Running backs were a point of emphasis when Taggart

went out to recruit the current freshmen class.

Those efforts paid off, as Taggart brought in

just a week away from their first-ever college game.

“I feel like we recruited the right guys,” Taggart

said. “All three of them did some good things in the scrimmage

yesterday that have us feeling really good.

themselves, then yesterday we put Sumler in there and the light

seemed like it came on. The kid came in there and ran hard. He was

Evans, Morgan and Sumler may find themselves working

in a backup rotation this year, competing for the job of spelling

highest total in the Football Bowl Subdivision, and WKU coaches

have emphasized finding other running back options throughout fall

Rainey said he was confident the other running backs

“I know when I go out that everything will still be

fine,” Rainey said. “I have confidence that the younger guys will

get the job done.”

for a football team.

But for Federspiel, taking on Kentucky Sept. 1 means

School in Lexington, and his father, Joe, was a UK linebacker

before moving on to a 10-year NFL career.

Joe Federspiel was named to the Kentucky 100th

Anniversary Team in 1990 by both the Lexington Herald-Leader and

will have special meaning for him.

fan,” he said. “I’m looking forward to playing them, and I think we

have a shot against them.”

were both high school teammates of Federspiel.

“They like to run their mouths a little bit because

they got us last year,” Federspiel said. “But we’re a lot better

than we were last year and we’re ready for them.”