Notebook: WKU looking to relieve Rainey with handful of backs 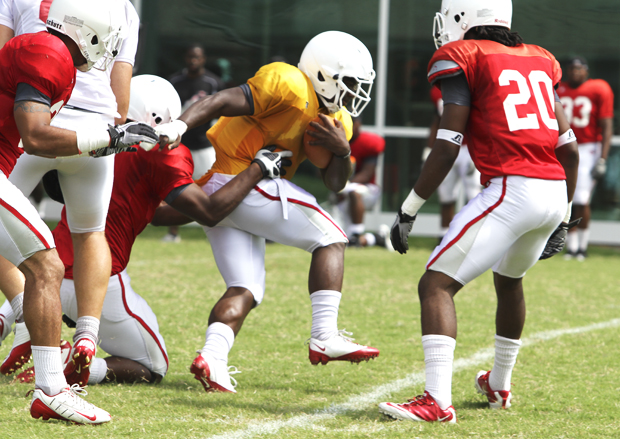 Senior running back Bobby Rainey, WKU's top returning rusher, wears a yellow jersey during the Toppers' fall camp signifying he's not to be tackled. Rainey has been named to a number of awards lists entering the 2011 season.

WKU’s rushing game in 2010 revolved around Bobby Rainey, as the then-junior running back led the Football Bowl Subdivision with 340 carries, running for 1,649 yards in the process.

But as Topper coaches look to keep Rainey fresh throughout the season, other options are emerging to shoulder some of the load.

Sophomore Antonio Andrews is the team’s second-leading returning running back. Andrews, a quarterback during his time at Fort Campbell High School, ran for 174 yards in 2010, averaging 5.4 yards per carry.

Offensive coordinator Zach Azzani said Thursday at WKU’s media day that some of the Toppers’ freshmen running backs may even have a shot at spelling Rainey.

“There is not one guy who is sticking out. There are a handful of them,” Azzani said. “There is a good battle going on back there.”

Veterans Braxston Miller and Keshawn Simpson will also be in the mix for playing time at running back.

While backfield depth will help take some of the load off of Rainey, the Toppers will look for junior quarterback Kawaun Jakes to lead a stronger passing game. Jakes threw for 1,680 yards in 2010, with 10 touchdowns and six interceptions.

Head Coach Willie Taggart said he was surprised during his first season as head coach at the level of criticism Jakes endured, especially considering his switch from the David Elson-era spread to Taggart’s West Coast offense.

“You have a guy that’s been in the shotgun all his life and you put him under center and tell him to drop back and read a defense,” Taggart said. “It’s not easy. Kawaun’s growing up just like the rest of our football team.

“I have to commend Kawaun because he’s done a great job of taking criticism. That was something I didn’t expect coming here, and he got a lot of it. Boy he got it bad, but he took it well.”

Dalcourt back on the field

If one player has potential to be a sentimental favorite among WKU fans in 2011, it’s sophomore wide receiver Courtney Dalcourt.

Dalcourt was highly-touted coming out of Franklin-Simpson High School but has suffered two separate severe knee injuries in his time as a Topper.

With sophomore Willie McNeal sidelined with an anterior cruciate ligament tear that he suffered during spring practice, Dalcourt suddenly has a chance at good playing time this season.

Azzani said he has been pleased with the work Dalcourt has put in all offseason.

“That kid doesn’t say a word about his injury,” Azzani said. “He straps that knee brace on every day and he comes out and he works, and every day he gets better.

“He knows his limitations right now, and he’s really trying to work around them. He has a fantastic attitude and he’s a great kid. Whatever happens with football, I know that he’s going to be a heck of a kid after he graduates.”

Other options for WKU at wide receiver will include junior Marcus Vazquez, sophomore Jamarielle Brown and redshirt freshman Rico Brown.

WKU starts the season playing three of its first four games at Smith Stadium, with its first at L.P. Field in Nashville.

But the Toppers haven’t seen much of a home-field advantage there recently, as they haven’t won a home game since September of 2008, when they defeated Murray State 50-9.

Taggart addressed the need for the Toppers to take care of business at home.

The idea is similar to what one might see on a reality show, but defensive coordinator Lance Guidry has a new gimmick that he hopes will put a competitive fire under every defensive player.

Before each practice, Guidry said coaches will put a red sleeve in players’ lockers. If a player sees he has a red sleeve, that means he’s a starter.

If not, “they just got the pink slip,” Guidry said. “There’s no for sure starters yet. Every day we’re competing for a job. We’re telling them every day is a game.”