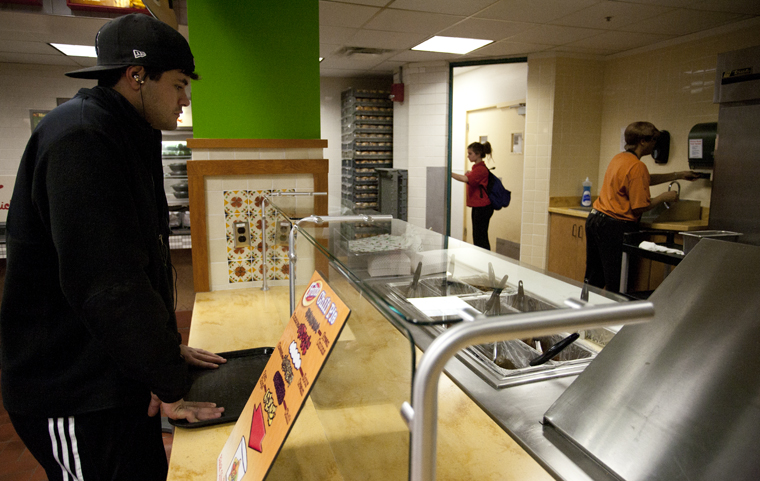 WKU has changed a few dining options this fall to please students’ appetites, and maybe even their waistlines.

“They didn’t have enough room to make a full Izzi’s, but it should be very doable,” he said.

WKU also brought Greens To Go, a salad restaurant, into the spot AFC Sushi previously occupied. Meszaros said sushi will still be offered, but now out of coolers.

“Greens To Go is a salad concept that people have been asking to have for a long time where you can get a salad on campus and not have to go through Fresh Food Company,” he said.

“Red Zone is cool and all, but I just can’t really eat there all the time,” she said. “A lot of it’s really unhealthy, and I try to watch what I eat.”

Paducah senior Travis Hickman said he liked the changes to DUC overall, but the ordering process at Izzi’s was slow.

“This Izzi’s isn’t as good as the one in Garrett, but I think it’s because they just got started,” he said.

Freshens has also expanded its menu to include crepes. The change to include food on the menu marks the first of its kind for the franchise nationally, Meszaros said.

The Tower Food Court also received a healthy refresh, replacing Edy’s with a second Greens To Go. Meszaros said WKU made the decision to replace Edy’s because ice cream is a seasonal product and space is limited.

“The real estate is so valuable,” he said. “We don’t want to use it for Edy’s which only sells at certain times of the year.”

Meszaros added that a soft-serve machine has been installed in the Pit Stop — the convenience store located next to the Tower Food Court — for students still hoping to get their frozen treat fix.

Tim Colley, district manager for ARAMARK and the WKU Restaurant and Catering Group, said many of the decisions for this fall were influenced by a 16-week research process called MarketMATCH conducted last spring.

“We’re looking at surveys with students here and also looking at what’s happening across the country at other campuses,” he said.

Meszaros said long-term plans include renovations of Garrett Food Court to provide more seating and dining options such as Panda Express and bringing a Starbucks on campus.