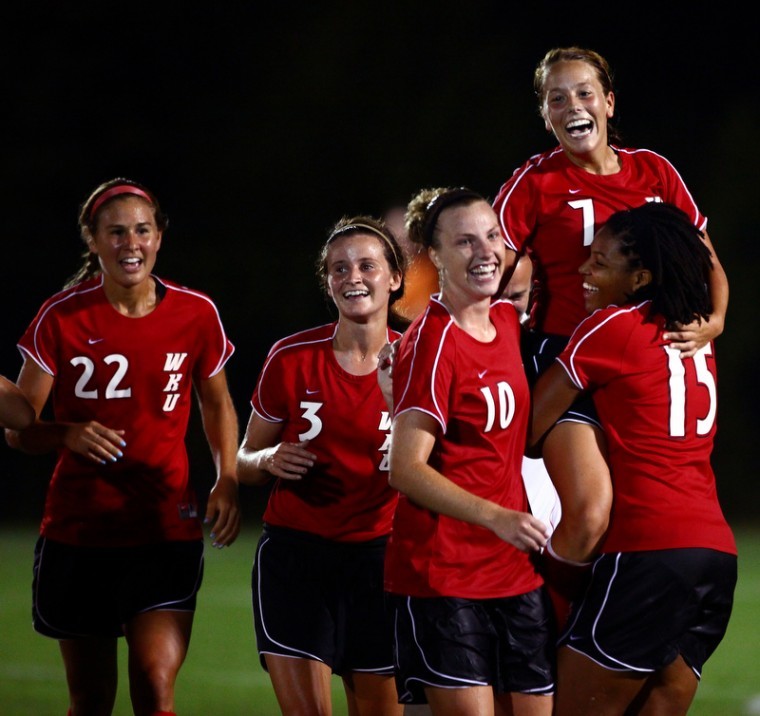 Freshman forward Leslie Chinn celebrates her game-winning, overtime goal on the shoulders of her teammates after the Lady Toppers' 1-0 win over Western Carolina in their season-opener

Scoring the game-winning goal is something that nearly every soccer player dreams of, but few accomplish. Freshman forward Leslie Chinn wasted no time experiencing that feeling in her first game at WKU.

Seven minutes into overtime against Western Carolina, Chinn scored her first collegiate goal and gave the Lady Toppers their first win of the season.

“It’s really exciting,” Chinn said. “I have worked really hard and learned so much from the team and the coaches. I am really just showing off the work that they have put into me.”

The feeling is nothing new to Chinn, though. She led her club team, Owensboro United, to the 2010 Kentucky State Cup title by scoring the game-winning goal as well.

The success translated to the her high school where she’s shined since her freshman year at Ohio County High School.

A four-time All-State and All-District selection, and three-time All-Region selection, she holds two different records at her high school — most career goals (92) and goals in a single season (42).

“She is a proven goal scorer,” Head Coach Jason Neidell said. “We were most impressed by her passion for the game of soccer. She is the kind of player who will go out on her own and kick the ball around and try to become better.”

Adjusting to the level of play in college is something that she said she’s still trying to get used to.

But the upperclassmen have been impressed by Chinn early on.

“I think it’s awesome that she came out so well,” senior forward Amanda Buechel said. “I don’t think a lot of people were expecting it and it’s awesome to see someone emerge so quickly.”

Neidell agreed and said that Chinn has exceeded everyone’s expectation, including her own, early on in the season.

“She’s a competitor,” he said. “She works her tail off. She is really coachable and has a great attitude and we knew it from high school. She’s a soccer junky and tenacious about the game.”

Her teammates see it too.

Buechel said that Chinn is always “buzzing” around the field and working hard to get in every spot. She added that having her get off to such a hot start will only increase her confidence and open things up for other players on the field.

“She has made such an impact the first two games,” Buechel said. “I’m looking forward to seeing what’s going to emerge later when she gets more experience.”

No one is more excited for what the future holds than Chinn.

“I am from such a small town. No one really ever goes (division one) at all in any sport because we’re so small,” she said. “I have my whole town supporting me and it is a dream come true to come to Western and play with this team.”