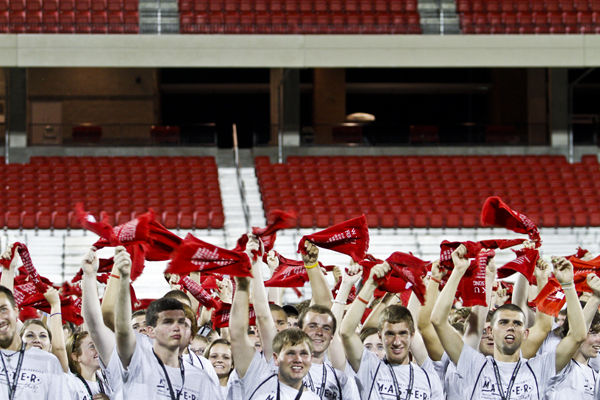 Some of the 2,000 or so incoming freshmen who arrived on campus Sunday cheer at Smith Stadium during M.A.S.T.E.R. Plan opening ceremonies. M.A.S.T.E.R. Plan is a program that acclimates new students to college life.

More than 2,000 freshmen stormed onto campus Sunday as M.A.S.T.E.R. Plan kicked off, introducing WKU’s newest students to life on the Hill.

Charles Rhea, an 18-year-old from Louisville, said this week means a lot to him. Both of his parents are WKU alumni, and his mom was a Lady Topper basketball player in the 1980s.

“I’m excited,” Rhea said. “I’m glad that we have it because it will give me a chance to get used to living on my own before I have to get real deep into classes and have to worry about studying. If I can get living on my own under my belt, that’s at least half of it.”

Brian Kuster, director of Housing and Residence Life, said that WKU started M.A.S.T.E.R. Plan 19 years ago to help students like Rhea do just that.

“We created M.A.S.T.E.R. plan to help students make the transition from high school to college,” Kuster said. “What we saw then and see today is students really aren’t psychologically prepared yet to make that switch.

“When you’re in high school, you’re a senior, and you know everybody in your school. Now you’re coming to a large university and you’re not.”

Kuster said the program was developed to help students connect with each other and faculty on campus.

Tim Rhea said his son had been very interested in M.A.S.T.E.R. Plan.

“Before we could even suggest it, Charles had already signed up and paid for it himself, if that tells you anything,” he said.

Jessica Piel, a 19-year-old from Evansville, Ind., said she was optimistic for M.A.S.T.E.R. Plan and the upcoming school year despite getting off to a bumpy start by packing too many things.

Kuster said there were more than 600 volunteers, spanning organizations from Western Leaders to Greek life, helping students such as Piel move in.

“A lot of the churches in town bring large numbers, but so do a lot of student organizations,” he said. “The football team even comes over and helps people move in for a period of time.”

One such member of the WKU football team was running back T.J. Smith, a freshman from Huntsville, Ala.

“It’s been tough, but great because every time we go out there we’re like, ‘Dude, do you need something?’” he said. “We’re helping people out — nothing like that in the world.”

Laura Rhea said there were so many volunteers helping her, they helped her son move in with one trip up to his room, making her feel more comfortable with leaving her son behind.

“We got everything in one trip because that’s how we roll,” she said. “It’s been very smooth. I think if we had come down here and had problems, we’d feel less comfortable about leaving him.”

But not every parent felt as comfortable letting go.

Piel’s mom, Holly Nicholson, said she knew her daughter was in good hands with all the support moving in. It was saying goodbye that was still difficult.

“A couple nights ago, I cried pretty hard,” Nicholson said. “I’m hoping I got it out of my system. She’s my one and only. It’s going to be pretty hard when I see that empty bed tonight.”

Kuster said WKU does as much as possible to make parents feel as if their children are protected.

“We see them as young adults, but their parents, no matter how old they are, see them as their little babies,” he said. “We show them there’s a caring community that’s willing to come out on a hot and humid Sunday to help them move in.”

Kuster also said M.A.S.T.E.R. Plan would host a few changes this year, but said tonight’s carnival following the opening ceremony would be a big change as WKU looks to expand that event.

“One of the things that students will see is different between last year and this year is the carnival,” he said. “This year there’s more things for students to do. We didn’t know how it would turn out, but that was a big success last August.”

Big Red’s Blitz, a day of community service set for Thursday from 9 a.m. to 3 p.m., will look to expand as well, Kuster said.

“Last year was our second year having the Big Red’s Blitz,” he said. “Again, those numbers seem to be very high with students volunteering to go in town and help.”