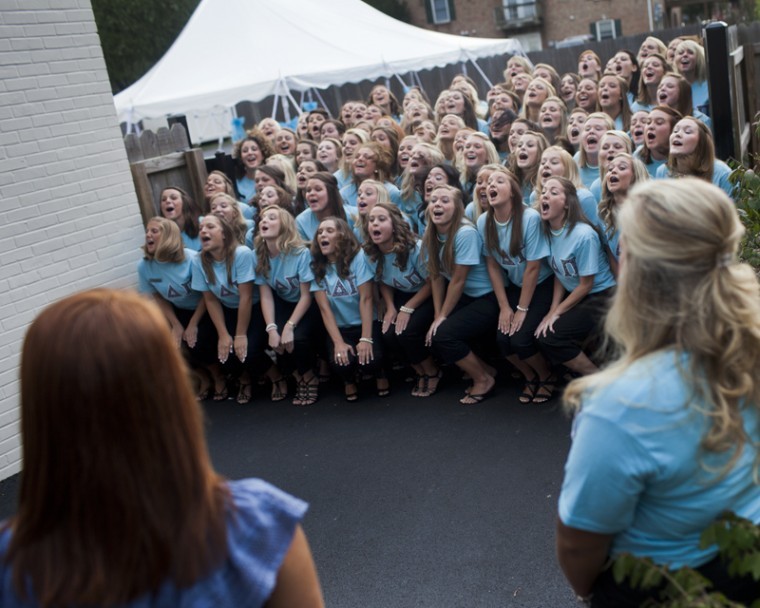 Alpha Delta Pi members sing and perform a choreographed welcoming cheer to potential new members outside the Alpha Delta Pi house during Rush Week's Getting to Know You Day.

Sorority rush is all about trying something new — meeting new friends and opening new doors — and not just for the ladies participating in rush.

This year, Student Activities and Organizations has instituted several new changes to the way recruitment will be conducted.

For the first time, the recruitment process added an extra night, called “Go Greek” night, which was designed to promote the idea of joining a Greek organization, said Charley Pride, director of Student Activities and Organizations.

Go Greek night took place at the Knicely Center on Wednesday evening, which required that the more than 400 recruitment participants be bused to South Campus — another sorority recruitment first, Pride said.

“Tonight could be a nightmare for us, getting them to the Knicely Center, getting them back,” Pride said on Wednesday. “We’ve not done that.”

Kristen Smith, a graduate assistant for Student Activities and Organizations, said she’s received positive feedback on the night from the women taking part in recruitment and active sorority members.

This is the third largest number in recruitment history, she said.

All participants attend Go Greek night, and the second night, which is “Getting to Know You” night, Pride said. During this round, the women visit each of the seven participating sororities’ houses and interact with each organization.

During the third round, the “mutual selection process” begins, Pride said. This is when sororities and recruitment participants both decide on which girls return to which houses.

“After each round, the sororities release some women because they can only invite so many back each time,” Pride said. “A lot of the rules and formulas we use are through their national organizations.” “There’s a (Massachusetts Institute of Technology) formula actually used for all of this and we have a specialist that we deal with.”

The fourth round on Saturday is preference. During this night, the potential new members only return to two houses, Pride said. In past years, they could return to three.

“We changed that to work on some of the mutual selection process,” he said.

Bid day, when potential new members are offered a bid to join a certain sorority, will be Sunday.

Smith said she anticipates that about 100 to 150 women will chose to withdraw from recruitment for various reasons, ranging from deciding Greek life isn’t for them or they don’t enjoy the process. This means about 300 to 350 will hopefully be placed in a sorority, she added.

Anyone interested in joining Alpha Xi Delta must withdraw from formal recruitment, which could affect the final number of women placed in sororities, Smith said.

Alpha Xi Delta members from Indiana University participated in Go Greek night but will not participate in the rest of formal recruitment, Pride said. Instead, they will host an informal rush after classes begin.