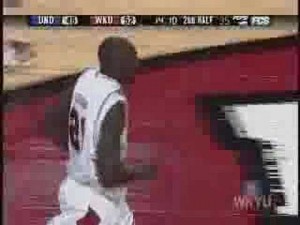 Former WKU forward Boris Siakam has been selected to a United States All-Star team that will participate from Aug. 20-28 in the Continental Club Basketball Championships in Beijing.

The former Topper, who was a member of the team’s Sweet 16 run in the 2008 NCAA Tournament, will team up NBA stars Paul Pierce of the Boston Celtics and Michael Beasley of the Minnesota Timberwolves.

Siakam, who actually hails from Cameroon but went to high school at Caverna (Ky.), played for WKU from 2004 to 2008, averaging 4.1 points per game and 3.1 rebounds per game during his career.

He averaged 6.6 points per game and 4.4 rebounds per game during the 2008 NCAA Tournament, hauling in a tournament high seven rebounds in an 88-78 loss to UCLA in the Sweet 16.

The U.S. team will play a round-robin tournament against national teams from Argentina, Germany, and China.