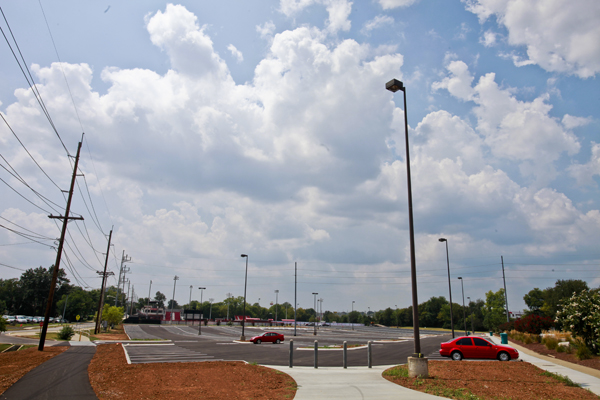 Creason lot has been reconfigured this summer, changing the design, layout and traffic flow of the lot that sits off Russellville Road in front of the softball field.

It goes by many names — Creason, Egypt, that lot on the other side of University Boulevard.

This fall, WKU hopes “headache” won’t be one of them.

The Creason lot has been reconfigured to enhance design, entrances and direction of traffic flow.

Jennifer Tougas, director of Parking and Transportation, said WKU made the changes to make the lot more student-friendly.

“It was really difficult for people to use,” Tougas said. “If you parked over a line, you affected someone else’s space. If your car was too long and you weren’t pulled into the space enough, then you blocked the travel ways because the travel ways were narrow.

“It was very difficult to get to parking spaces because of the number of one-way travel ways that were going in the same direction.”

But the changes Parking and Transportation made will fix those problems, Tougas said.

“What we’ve done is taken everything to 90-degree parking and two-way traffic in all the lanes,” she said. “It’s going to be a much nicer parking lot to navigate.”

Bryan Russell, director of Planning, Design and Construction, said one reason the changes were made was to accommodate bus travel.

“We have provided a very nice bus stop,” he said. “We have put in heavy duty pavement that allows the transit system to go into the parking lot, pick up people that are waiting at the bus stop, and then we have a means of egress going out on University Boulevard for a better route.”

Tougas said an entrance and exit have also been added on Russellville Road to help with event parking, to allow students to turn left onto University Boulevard and open up the west side of campus.

“It’ll be easier to get in and out of the parking lot,” she said. “It will help us out with events especially — using the Creason lot as an event parking location and getting quickly up to Diddle Arena and L.T. Smith Stadium.”

Parking and Transportation has made some zone changes as well, transforming the back part of Creason Lot into a commuter-only parking lot and turning the parking lot on Normal Street into a housing-only parking lot, Tougas said.

Tougas said the change should make it easier to travel to the top of the Hill.

“What we found this past year was with the construction happening on Block 12 — having 13th Street and 14th Street offline — it was really difficult for any university traffic to get to the top of the Hill,” she said. “Historically, it’s been recommended to change that road to two-way traffic.”