Steam line construction at WKU wrapping up before students return 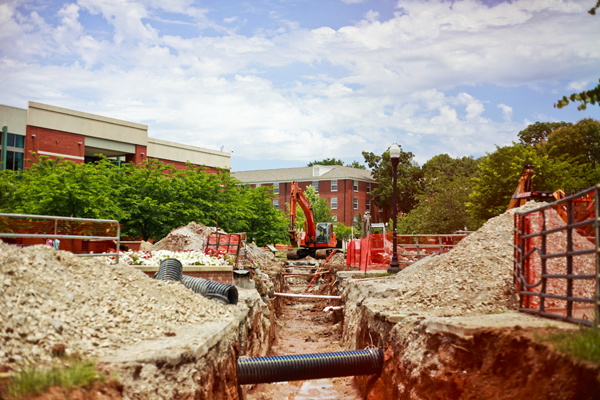 Steam line construction between Minton Hall and DUC is now complete, according to WKU officials. Seen here in June, construction had closed the Minton Circle to thru traffic with much of the surrounding lawns torn up.

A steam line located between Downing University Center and Minton Hall broke last semester, continuously spewing warm steam up through the surrounding lawn while creating a white cloud of gas.

Bryan Russell, director of Planning, Design and Construction, said that trouble spot and four others around campus have been repaired as part of a $1 million project, leaving students to worry about the actual move-in process and not construction.

“Someone said to me the other day that a long time ago, the Indians could put their ear to the ground and hear enemies coming,” Russell said. “Well, we’re very aware of the mass of students and guests that are coming to our campus.”

Construction had closed traffic around the Minton Circle into last week and left much of the lawn between Minton Hall and DUC torn up.

“The steam line projects this summer have been our largest projects on campus,” Russell said. “The reason it was such a challenge is that it required us to close accessibility on some of our roads.”

Russell did say some construction will continue into next week with steam line repairs wrapping up, but disruptions will be limited to work in manholes and will not affect traffic or accessibility.

John Osborne, vice president of Campus Services and Facilities, said many campus changes take place in the summer to avoid wearing faculty, staff and students out on construction.

“We have worked very hard this summer to alleviate construction fatigue,” Osborne said.

Some important changes to campus occurred on Adams Street, where the gravel parking lot for commuting students has been doubled in size to accommodate more commuter traffic.

However, a third parking structure on Adams Street for commuters originally expected to be open in the fall will remain closed to continue construction in the area, Russell said.

Osborne said WKU’s campus is similar to a car, with many parts requiring regular maintenance to increase their life span.

But that creates something Osborne calls “deferred capital renewal,” meaning every so often something breaks from prolonged use, such as the Minton steam line, and must finally be replaced.

“Nothing lasts forever,” he said. “With the age of our campus, things happen like that. We don’t have 150,000 miles on our car because we maintain it.”