Mead: Students will receive bills alerting of tuition hike in a month 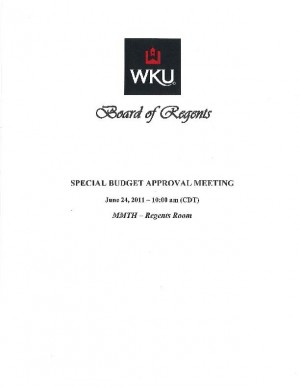 Students taking class this fall will face an increase in tuition and a new student fee.

Under the new $385,047,000 budget approved at the Board of Regents special budget meeting Friday, undergraduate tuition and fees for Kentucky residents will increase from $3,780 to $4,042. This includes the $70-per-semester student fee for renovations to Downing University Center.

Ann Mead, vice president for Finance and Administration, said WKU plans to get word out about the increase to students by putting it on the university’s website. Students should also receive the first round of bills in about a month, she said.

WKU’s total budget is a 1 percent increase from the previous year. Mead said this increase is modest compared to what is happening at universities in other states.

All board members voted in favor of the tuition hike except for SGA President Billy Stephens, who is the student regent. Stephens said he understands the university didn’t want to have to cut jobs, but he wishes that students didn’t have to take the entire burden.

“The students are the people who voted for me, so they’re my constituency,” he said. “And I’m a student too.

Stephens said it concerned him that many students were not aware of the tuition increase.

“I know it’s the summer and students don’t want to think about school,” he said. “But I’d like for more of them to know what’s going on.”

WKU’s student fee is the lowest of other Kentucky universities who are putting in student activity facilities or renovations, said Howard Bailey, vice president of Student Affairs.

“When you look at what other campuses have to offer their students outside of the classroom we are still far ahead,” he said.

In April, the Council on Postsecondary Education put a 5 percent cap on undergraduate tuition and fees increases for comprehensive universities. Research institutions such as the University of Louisville and University of Kentucky were allowed a 6 percent increase.

“It is uncomfortable any time we have to increase tuition, but it is a reality,” said President Gary Ransdell. “We fully recognize the frustration for students, but it is still a bargain for students to come here and get a degree.”

“We have to invest in education,” he said.

Wilkey said the state forces universities, in some way, to price education out of some people’s hands.

Because state appropriations make up more than 19 percent of the total budget revenue, recent reductions in state funding have impacted the budget significantly.

Ransdell said WKU has dealt with bad cuts and have reached a point where further budget cuts are going to be exceedingly difficult.

“We have faculty that need to be paid,” Ransdell said. “The budget allows us to increase what we can do — and that makes a good investment.”