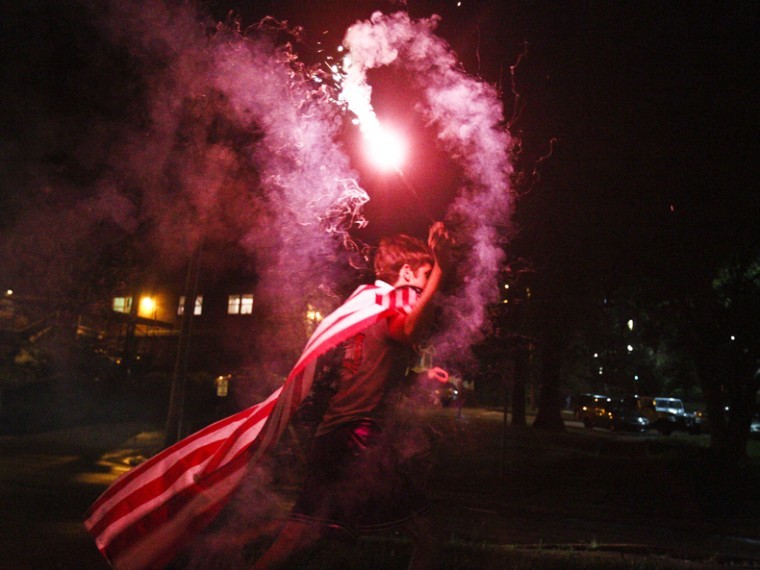 Scores of students chanted “USA! USA!” from their dorm windows on Sunday night, while others shouted “America!” in response.

Owensboro freshman Trip Carpenter and Mt. Washington freshman Cody Hutchins ran from Zacharias Hall up the Hill, then down past Hilligan’s waving an American flag — an act that was greeted with cheers from those they passed along the way.

At the Sigma Alpha Epsilon house, members of the fraternity joined members of Sigma Chi in shooting off fireworks and singing patriotic songs.

They were all celebrating what President Barack Obama had announced just moments before — that U.S. forces in Pakistan had killed Osama bin Laden, the mastermind behind the 9/11 attacks that claimed nearly 3,000 lives.

“There’s so much patriotism swelling in my heart right now,” Carpenter said. “This is a symbolic step toward a more peaceful world. USA will rise above.”

The excitement and patriotism could be seen across social media networks as Americans celebrated what Obama called the “most significant achievement to date in our nation’s efforts to defeat al-Qaida.”

Hutchins said that like many Americans, he didn’t know what to expect when the White House announced an impromptu address Sunday. But he said when the announcement was made, he and Carpenter couldn’t help but celebrate.

“We just felt it. That universal spirit — just that pride in America,” he said. “This could possibly mean the war is over.”

The fight against terrorism didn’t come without affecting WKU directly.

Jason Caldwell, who is head of WKU’s military science department, was once a part of the 101st battalion from Ft. Campbell, the same one as Yates. Caldwell said he only met Yates once, but said he still felt like they were brothers given their connection.

Caldwell said bin Laden’s death will “bring closure to a certain chapter in this book on terrorism.”

Louisville senior and SAE member Ben Lineweaver said one of his high school friends lost his father in the 9/11 attacks.

Lineweaver expressed the same thoughts as Caldwell. He said there are plenty of families such as his friend’s and Yates’ with similar stories, and that the news of bin Laden’s death will provide them with peace of mind.

Owensboro senior and SAE president Steven Edds recounted seeing footage of people burning and stomping on the American flag in celebration after 9/11.

Those images replayed in his head as he celebrated on Sunday night.

Lineweaver admitted that it may seem inhumane to celebrate the death of a fellow human. But he said that’s not why he and those with him were celebrating.

“I think we’re celebrating this more as a victory for the country,” he said. “You think about how many lives he’s destroyed and how much harm he’s caused us and how much pain he’s caused all those families.

“It’s not just a victory for America, but it’s a victory for every other country in the world that has been affected by (bin Laden’s) terrorism.”

Celebrations at the SAE house continued throughout the night, and many others passed by the house on 14th Street to join in on the celebration.

“This just shows everybody that we’re not over there for nothing,” Lineweaver said. “We accomplished what we set out to accomplish. That’s more important than anything.”